Daniel Berger Talks To Us About His Friendship With Justin Thomas, Boredom During The Pause And The Game Of Golf Being Better Than Ever 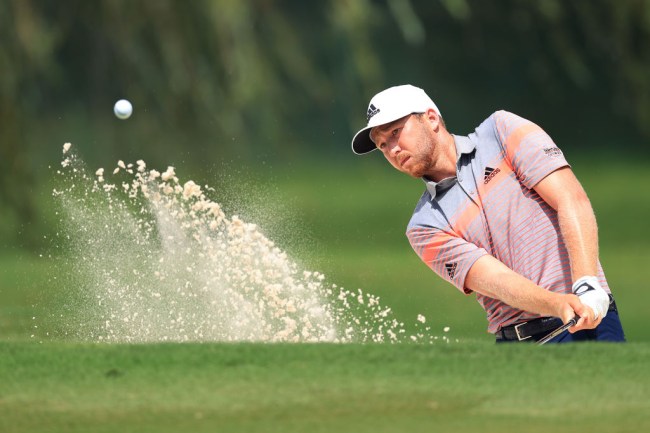 For some reason, Daniel Berger tends to fly under the radar more often than not. Maybe it’s because he’s not the most outspoken or flashiest player on the PGA Tour, but his game does plenty of talking.

Berger is currently the No. 18 player in the world and is a three-time winner on the PGA Tour. The 27-year-old was also a member of the U.S. Presidents Cup team back in 2017. As far as this season goes, he has put together a mighty impressive campaign with a win at the Charles Schwab Challenge to go along with another five Top 10’s in just 14 starts thus far.

You could call the 2019-20 season a comeback for Berger after dealing with a wrist injury late in 2018 that kept him limited for quite some time including a large chunk of last season. That’s in the rearview now as he enters the FedEx Cup Playoffs ranked No. 7 in the standings playing some of the best golf of his career.

Prior to year’s first Playoff event, The Northern Trust, we got a chance to talk with Berger about his season thus far. We also discuss how great a spot the game of golf is in right now as a whole, his friendship with Justin Thomas, frustrations when the season was paused, and much more.

BroBible: You finish seventh in the Wyndham Rewards this year earning a smooth $700,000 bonus and enter the Playoffs in a great spot as well. You missed out on the Playoffs last season and dealt with a pretty serious wrist injury not too long ago, just how excited are you to get things going here in the Playoffs again?

Daniel Berger: Yeah, I’m really excited, obviously missing the Playoffs last year was tough and when I first came out on Tour, I made three straight Tour Championships and I thought, ‘oh, this is easy, I could do this every year’. Then you start to realize how difficult that actually is. I feel like I’ve worked really hard and I’ve put a lot of time in to get better in the last, you know, year and a half and it’s starting to pay off. Then obviously to be in a good position heading into the first Playoff of that is key because the Playoffs are weighted so heavily. You need to play well to have a chance at Tour Championship.

BB: Everyone’s had a unique experience this year due to the pandemic, but you were back healthy and playing really strong golf leading into The Players before the Tour pulled the plug. I imagine it had to be pretty frustrating for you at that moment. How’d you take that news and what did your break look like?

DB: I think at first when they canceled The Players, I was a little bit frustrated, but I didn’t quite understand the scope of the whole coronavirus pandemic. And then I think the more information I got on it, I realized it was the correct decision. The Tour made the right call in canceling that and suspending the season for the time being.

The time that I did spend at home it was pretty boring, to be honest. The first three or four weeks, we kind of just sat around and were trying to find things to do. With all the local and state restrictions that were in place, we weren’t really able to do much. We were pretty limited on who we were seeing. We were just kind of hanging out. But I was lucky enough to live right next to a golf course that stayed open because they were in a different county, so I was able to get out there a couple of times a week. I just walked nine holes and more just to kind of get out in the fresh air and get in the sun and kind of get some exercise. It wasn’t really much practice, I would say. Once these restrictions started to lift, we got right back at it and started working hard again.

The weeks leading up to the shutdown, I had had a bunch of Top 10 finishes in a row so it was kind of just picking up where I left off. I think it was just a testament to the work that I put in leading up to this year.

BB: You come out and win the Charles Schwab, the first tournament back after the season resumed, and have picked up three other Top 10’s since then as well. What’s been working so well for you this year? The short-game, stats-wise, seems much improved.

I think I’ve never really even been close to the Top 100 in scrambling and this year, I think I’m second or so in scrambling on Tour. That’s obviously going to make a huge difference when you’re getting up and down more often.

BB: Doing some digging on your Instagram, there’s a photo of when you earned your Tour card back in 2014. That 2014 class was just loaded with guys like Justin Thomas, Tony Finau, Max Homa, Adam Hadwin, and others. What’s it like thinking back to those times and now reminiscing on the success you and that entire group has seen out on Tour over the past six years and counting?

It’s really cool looking back to the Web.com days when we were playing out there and it was those guys that you mentioned and a few more. We’ve stayed really close over the years and we see each other every week so we’re very friendly. We play a lot of practice rounds together. I just think the relationships that you develop over time is what’s really special.

You get to meet so many different guys that you maybe wouldn’t have otherwise have known if it wasn’t for the game of golf, that’s the coolest part about it.

BB: You’re good buddies with Justin Thomas. He’s pretty good at this golf thing. You’ve known him for a while now, do you guys feed off each other whenever you see one or the other have good weeks?

Absolutely, I think it is definitely an outlier when you look at what he’s accomplished in such a short amount of time. I mean, he has a Hall of Fame resume at 26-years-old. He’s just one of those guys that I think was born to play golf. Whenever you see someone like that, the same age as you growing up playing, you know, junior golf, college golf, amateur golf, professional golf, you always strive to get better just being around people like that. So I think it’s been great for my golf game.

You look at the other guys in that 2011 high school graduating class Jordan Spieth, Emiliano Grillo, Patrick Rodgers, Ollie Schniederjans and the list goes on. We’ve all been friends for so long, we’ve all pushed each other to get better over time.

BB: Your dad played professional tennis. What lessons did that teach you growing up? Golf and tennis tend to get looped in together, but you’ve said in the past it’s not the case because any lazy person can go play golf. On that note, just how good of a spot do you see the game in right now?

I think it’s in the best place that it’s ever been. You look at the young guys, the Collin Morikawa’s, the Xander Schauffele’s and that group, those are the guys that are going to be on the top of leaderboards for the next 10 or 15 years. That’s a great thing for golf.

You also look at the international players that have come over at a young age and had success and that’s fantastic and something that the Tour really needs. In speaking to the tennis aspect that you were talking about, I think it’s important for young golfers to play all the different kinds of sports, something that I did when I was growing up. You don’t see that as much. They kind of get stuck on one sport and just stick to it. But I think it’s it’s a great thing to develop all the different skills from all the different sports and then kind of figure out what you love and what you want to do.