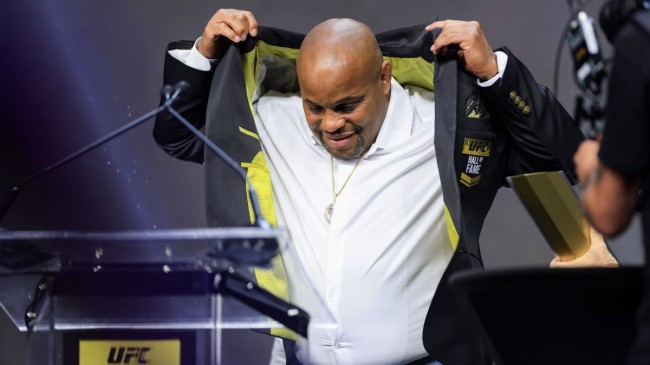 Daniel Cormier has secured his place as one of the greatest fighters, let alone heavyweights, in the UFC’s relatively short history.

Cormier, who was a national champion and Olympian in wrestling, dominated in two separate divisions in the UFC. He racked up a 22-4 record in his MMA career, including 13-4 inside the UFC octagon. Along the way, Cormier won both the UFC light heavyweight and heavyweight championships.

But his career didn’t end as planned. Cormier often stated his desire to retire when he reached the age of 40 in 2019. Instead, however, he fought twice more after that. Cormier lost a pair of fights to Stipe Miocic. He first lost the UFC heavyweight championship via TKO in 2019 before losing the rematch via decision in 2020.

He then retired immediately following the rematch.

Now Cormier is admitting that he should have retired prior to either of those fights taking place due to a serious back injury.

Cormier spoke with Ariel Helwani on The MMA Hour and revealed that he wishes he had retired prior to fighting Miocic the second and third time.

“Me fighting Stipe Miocic after my back surgery, those two times, that wasn’t the same fight. I couldn’t wrestle! I should’ve stopped in ‘18. I should’ve stopped in ‘18. I should have retired after Derrick Lewis. Especially when I had back surgery. I was so severely limited it was crazy. My wrestling workouts, I went from wrestling 30, 40 minutes rounds and matches to doing ropes and jump-roping and doing wrestling movements without the physical contact of the wrestling. It was crazy. I couldn’t wrestle like I wanted to…” – via MMAFighting.com

Cormier then said that a younger, healthier version of himself would not have lost the fights.

“He won the fight, and I’m not one of those guys who is going to sit here and lie. Dude won the fight. But, dude wouldn’t have — I don’t think he ever would have beaten me when I was younger and I was doing everything. I was just a better fighter.”

Some UFC fans weren’t too appreciative of the comments.

“I would’ve liked to have not lost twice to Stipe”

Translation= I should have ducked the Stipe rematch

But Cormier’s spot in history is secure either way. He entered the UFC Hall of Fame last year alongside teammate and fellow former champion Khabib Nurmagomedov.