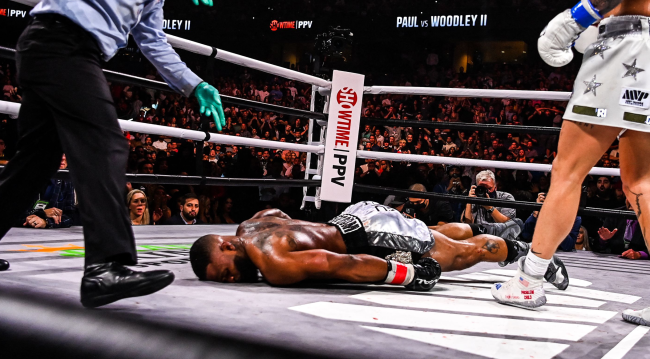 Shortly after being knocked out by Jake Paul in the sixth round of their boxing match, Tyron Woodley, a former UFC Welterweight Champion, created a meme contest making fun of himself based on the image of him out cold on the canvas.

Woodley offered a $5,000 prize to the person who could come up with the best meme, writing on Instagram, “People talented at photoshop and editing. Might as well get paid for it. Here you go. 5 Bands to the funniest video/pic.”

Woodley later announced that the winner was someone named Chris Ashley, who, in all honesty, created a true meme masterpiece that ended with Tyron taking a nap alongside Conor McGregor, Ben Askren and Nate Robinson.

Not everyone, including Daniel Cormier, appreciated Woodley’s self-deprecation

Of course, Woodley flippant response to being knocked out cold by a guy with four professional fights under his belt (against a YouTuber, a former NBA player and a retired mixed martial artist) didn’t play well with everyone.

“That rigged KO money got you feeling like a philanthropist. Guess it was worth faking it in front of the world,” one person commented.

During an episode of the DC & RC Show this week, Cormier said, “I don’t know what T-Wood was doing on social media. He pulls the knockout. He made a contest about… it’s like Jake Paul is beating these dudes so bad, that they start to make fun of themselves.”

Of course, that was after Daniel Cormier about bust a gut laughing at Ryan Clark describing Jake Paul as a “knockout artist.”

“Who has knocked out more established UFC veterans in the fashion that they have than Jake Paul?” Clark somehow said with a straight face.

“Here’s the difference,” Cormier tried to explain. “They’re going to fight this kid under his rule set. This kid has all the time in the world to train. Kid has money. Kid has ways of improving, and honestly, he’s much better than people want to give him credit for. The kid can fight a little bit.

“My biggest issue is these guys go in there to fight this dude. They they lose to him. Ben Askren was immediately almost making fun of himself.

“It’s almost like you’re so embarrassed that you lost to the Disney kid or the YouTuber that you start to almost become like self-depreciating.

Was the fight fixed?

As for all the claims that the fight was fixed, UFC Hall of Famer Michael Bisping says nah to all all that.

“It’s ridiculous!” Bisping said on the Believe You Me podcast. “Anytime somebody gets beat, knocked out, something like that, these conspiracy theories start going around. There’s no way Tyron Woodley’s gonna do that. Secondly, I’ve seen enough knockouts to know when one is real. That looked f—ing real. The fight wasn’t real. The fight was garbage, it was piss poor, it was sh-t, it was nonexistent. The best thing that happened to Jake Paul was him actually landing – it was just a solid shot. The kid can bang, simple as that. He’s a big, strong, young kid. Boom. That’s not a fix!”