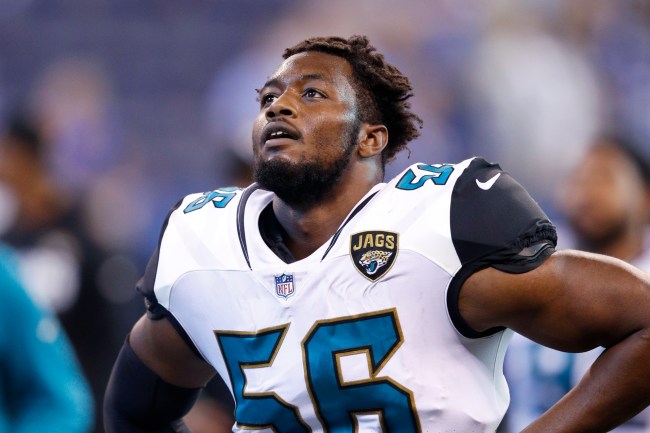 It would appear that the Jacksonville Jaguars have a Dante Fowler problem.

The fourth-year defensive end and third overall pick in the 2015 draft has been suspended for a week for his involvement in a post-practice fight with teammate and fellow defensive end Yannick Ngakoue.

While practice fights aren’t uncommon (although they usually occur between teammates on opposite sides of the ball), the flare-up is indicative of a troubling pattern of behavior for the 24-year-old, who was arrested last year for simple battery and criminal mischief a year after he was arrested and charged with “assault against a police officer/EMT.”

More training camp fights, but this time between teammates.#Jaguars star DE Yannick Ngakoue got into it with DE Dante Fowler. Had to be separated by other teammates.pic.twitter.com/TMUo2HAhmW

OH! And lets not forget that video of Fowler refereeing a fight between his girlfriend and baby mamma. Top-shelf entertainment, but not something an employer will deem imperative in a collective quest to dethrone the Patriots in the AFC.

Following the fight at practice, which resulted in Fowler needing to be escorted off the field by Jags’ general manager David Caldwell, the team released a statement saying Fowler and Pro Bowl cornerback Jalen Ramsey were suspended “for violating team rules and conduct unbecoming of a Jaguars football player.”

Ramsey was suspended for calling out local media for their treatment of Jaguars players, namely Dante Fowler.

One would think that Fowler was done standing in his own way, especially seeing as after a promising 8-sack 2017 season, but that would just make too much sense. He tweeted and deleted the below last night:

I hereby declare this to be my response to any and every time I step out of line and someone calls me on it.

Draw a penis on the white board before a company meeting: They hated Jesus too ..

Leave two kernels of cereal left so I don’t have to throw away the box: They hated Jesus too ..

Get blind drunk before a funeral: They hated Jesus too ..

You can do no wrong when you have the Messiah in your back pocket.