Darren Sproles Tore His ACL AND Broke His Arm On The SAME PLAY And Yep, That Looked Painful 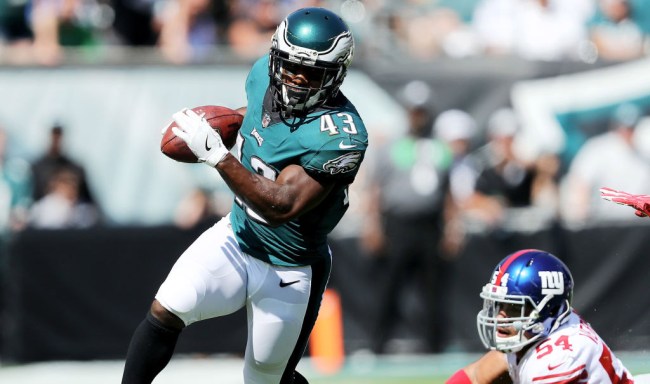 It isn’t often that in the matter of just 8 seconds a person can both tear their ACL AND break their arm, but Philadelphia Eagles running back Darren Sproles managed to somehow do exactly that in Sunday’s game versus the Giants.

During the first half of the game, Sproles took the handoff and ran to the left side of the line when as he tried to turn the corner he was met HARD and spun around by Giants safety Darian Thompson. Trainers then attended to Sproles on the field and he was able to leave the field under his own power, but was seen holding his right arm as he walked off.

Today, Adam Schefter reports that Sproles not only broke his right arm on the play, he also tore the ACL in his left knee.

Here’s the play on which it happened…

And here’s a closer, slower and more NOPE-inducing look at the play…

#DarrenSproles will need surgery.
See how he breaks arm on an inadvertent kick. Read when he will be back: https://t.co/GAoEldQCrh pic.twitter.com/LY5fXHPBFi

It is assumed that this will end the season for Sproles who had previously hinted that this might be his final season before retiring.

And this man Darren Sproles just walked to the locker room like it was just a light bruise.