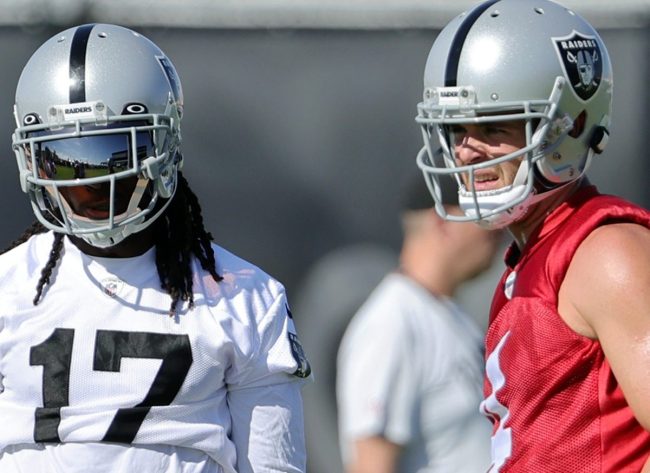 Davante Adams is going through quite the offseason adjustment. The superstar wide receiver is transitioning from Green Bay to Oakland after being traded from the Packers in March.

The pass catcher will now go from hauling in receptions from last year’s MVP, Aaron Rodgers, to teaming up with his old college teammate in Derek Carr. The two formed a dynamic duo at Fresno State, becoming one of college football’s most dangerous combos.

They’ll hope to replicate that success at the professional level.

But while there’s certainly some familiarity between Adams and Carr, the receiver admits that there is an adjustment. Adams said the following when asked about how he’s handling moving on from Aaron Rodgers.

“Any time you change QBs from Hall of Famer to Hall of Famer it’s going to be a little bit of an adjustment. Both are great players and great to be around.”

Adams was quick to praise both his old and new signal callers, seemingly calling them both Hall of Famers. While Rodgers is a sure-fire Hall of Fame selection upon his retirement from the NFL, some fans aren’t sold on the label for Carr.

Fans were quick to chime in after hearing Davante Adams’ comments about the adjustment going from Rodgers to Carr. Many don’t yet believe his new signal caller has earned the title of Hall of Famer. After all, he’s made just one playoff appearance, posting an 0-1 record.

Hall of Famer to Hall of Famer? What am I missing here? Does Aaron Rodgers play for the Raiders too? https://t.co/w4sWzCWPpH

I mean, I get that they are teammates and close friends, but you’re allowed not to be delusional in public.

While the comments might open Adams up to criticism, it’s good to know he has Carr’s back.

The wideout had to clarify his comments after seeing the reaction on social media. Here’s what he had to say.

“When I saw [the original quote] written out, it kind of made my stomach drop a little bit because I was like, ‘Oh, God, here we go. People are going to blow this up and take everything I say, and we’re the only team in camp right now.

“But what I’m not going to do is say Derek is not going to be a Hall of Famer because at the end of the day I believe [he is]—and this is not putting any expectations or any added pressure on him because he puts that type of pressure on himself because of what he expects every time he touches the field.”

While he admits his words were misinterpreted, Adams still believes that Carr has Hall of Fame abilities. He hopes that the quarterback will show those skills off as the duo looks to land Oakland a Super Bowl title.