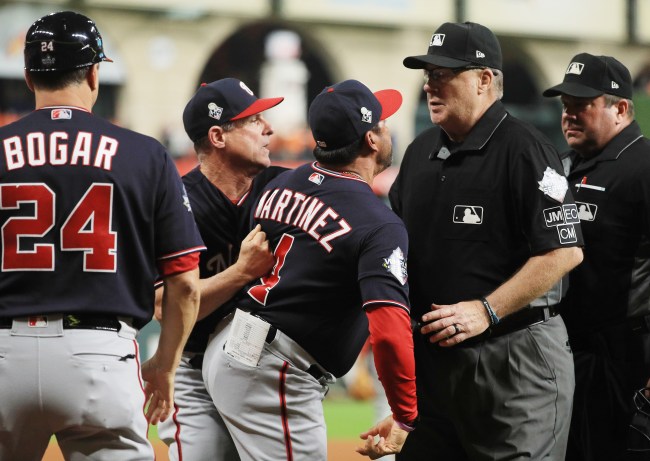 I have a theory.

The umpires in Tuesday night’s Game 6 of the World Series were ordered by the MLB powers that be to make one egregious, head-scratching call to ignite outrage and pour gas on the viewership flame, a flame that has been dwarfed by NFL offerings running simultaneously. I’ve worked on the internet far too long and if there’s one thing that generates clicks, it’s controversy. Even the archaic MLB knows this.

That’s why umpire Sam Holbrook called Nationals’ Trea Turner for interference for what appeared to be your everyday, average run to first base. The play was not reviewable under MLB guidelines, as it was a ‘judgement call,’ as is literally every goddamn call.

This call infuriated everyone in the Nationals dugout and beyond, with Turner audibly calling out Joe Torre, Major League Baseball’s chief baseball officer, who was sitting nearby. (Torre would later defend Holbrook’s interference call, predictably.)

Now, thanks to MLB enthusiast and Twitter user Jomboy, we are able to decipher exactly what Trea Turner and Dave Martinez said in their outrage, and it is equally entertaining and hilarious.

Oh yes, this is NSFW. Unless you’re a sailor! HA!

Trea Turner gets called out on interference and Dave Martinez gets ejected, a breakdown pic.twitter.com/mJMZbVdKtj

Thank you for coming to my TED Talk.