David Ortiz Gets Crushed For His Hot Take On The PED Suspension Of Fernando Tatis Jr. 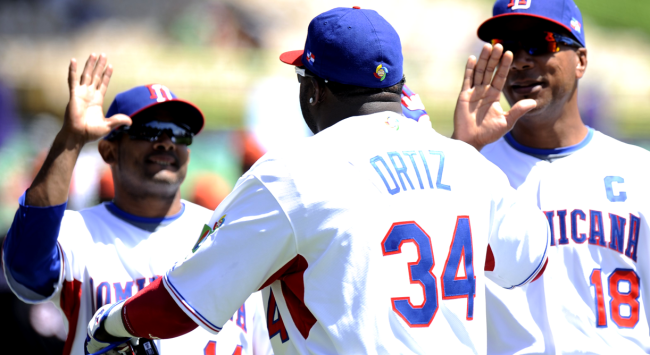 Boston Red Sox Hall of Famer David Ortiz was asked about the 80 game suspension given to Fernando Tatis Jr. for using PEDs and much like Tatis’ dad, Ortiz doesn’t think the punishment fits the crime.

Fernando Tatis Sr. (pictured above high-fiving Ortiz at the 2009 World Baseball Classic) went off on Major League Baseball for suspending his famous son for what he says was nothing more than a bad haircut (after Tatis Jr. initially said that it was due to a treatment for ringworm).

“What involves him (Tatis Jr.) is a steroid that contains a spray called trofobol…” Tatis Sr. told MLB insider Hector Gomez. “He got a fungus due to a haircut. His mistake was not reading what it contains, which is what apparently makes him guilty of something totally unknown.”

Fernando Tatis Sr. went on to say, “It was a mistake that could have been handled differently, destroy the image of a player for such a small thing, for a situation like this. Is a catastrophe not just for Tatis Jr., but for all baseball. There’s millions of fans that will stop watching baseball.”

“MLB needs to have some regulations before they made public news like the one that happened to Tatis Jr,” Ortiz told Gomez on Monday. “I think they haven’t handled this situation the right way. We can’t kill our product, we’re talking about an amazing player.”

Ortiz didn’t expound on why he believes that Tatis Jr. being suspended for allegedly using PEDs by accident should have been handled differently than the numerous other players who have made that same claim and received the same treatment and punishment over the years.

After all, Fernando Tatis Jr. himself said in a statement released by the MLBPA that after initially appealing the suspension he said he “realized that my mistake was the cause of this result, and for that reason I have decided to start serving my suspension immediately.”

Not lost on many baseball fans is the fact that David Ortiz appeared on a 2003 list of players who tested positive for PEDs that was supposed to have been kept private. MLB commissioner Rob Manfred later attempted to clarify and exonerate Ortiz, but there are still many fans that simply refuse to believe Manfred or Ortiz, for that matter.

So David you're saying MLB ignored your cheating because it would hurt the game and you want them to continue to ignore cheating from great players? Got it

So if he got caught with only a little bit of meth is that okay too? Because both are against the law and the rules. GMAFB

How much more careful did he want the MLB to be? This was in March and we are just hearing about it now. To say they are killing the product is a bit of a stretch. We’ve got other amazing ball players in MLB to grow the sport. Ohtani, Julio Rodriguez, Juan Soto etc.

I don’t know what rules he wants. It was kept confidential until the point of the appeal being withdrawn and it’s Tatis who put out a probably false story to his own detriment

Sounds like he’s suggesting MLB take it easy on him because he’s a “super star”. Based on all Tatis has done over the years sounds to me like he’s been a spoiled brat for a long time.

Right, Papi. Whatever we do don’t place any responsibility on the player?

Not to mention…they sat on this news for months.

Gimme a break, dude is selfish and getting exactly what he deserves.