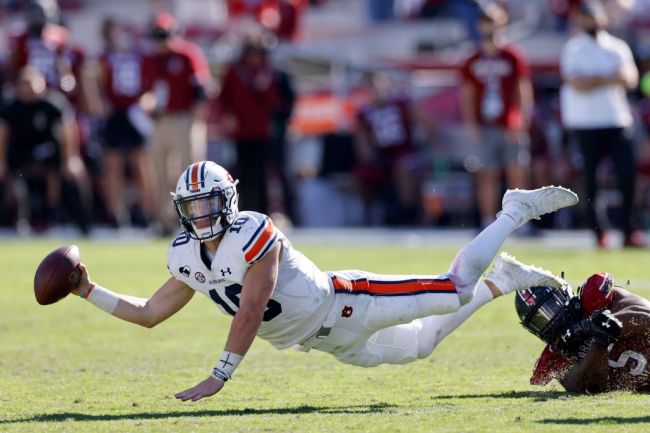 The start to Bo Nix’s sophomore season at Auburn has not gotten off to the greatest of starts. While he did throw for three touchdowns in the season opener against Kentucky, Nix is coming off of bad outing against South Carolina where he went just 24-for-47 through the air throwing three picks in the Tigers’ loss.

So far in his young career, Nix is best known for three things: beating Oregon in his first career college start, his lack of accuracy throwing the football, and his tendency to evade the pocket far too often. Last season, Nix completed just 57% of his passes and so far this season that number has dropped to 54.9%.

While his ability with his feet and overall gamer attitude are big-time positives, his bad habits have kept him from taking a step forward so far this season.

ESPN’s David Pollack broke down Nix’s poor habits, but on top of that, he pointed out the fact that Auburn’s system is outdated and that it isn’t really fitting into Nix’s greatest strengths.

“They do things I’d do differently, and they can take advantage of their personnel and talent a lot better. Bo Nix isn’t off the hook either, Kevin. And I say that because I haven’t seen a quarterback in college football evade a clean pocket more than Bo Nix. He has a bad habit – look he’s a good athlete – but he has a bad habit of leaving the pocket too prematurely. So I think he needs to grow in that area and say ‘I got wheels but let me do damage with my arm first.’”

Nix will have a great opportunity to get things back on track this Saturday as Auburn takes on a horrid Ole MIss defense. The Rebels’ defense ranks second to last in all of Division I football allowing 579.5 yards per game including 314 yards through the air.