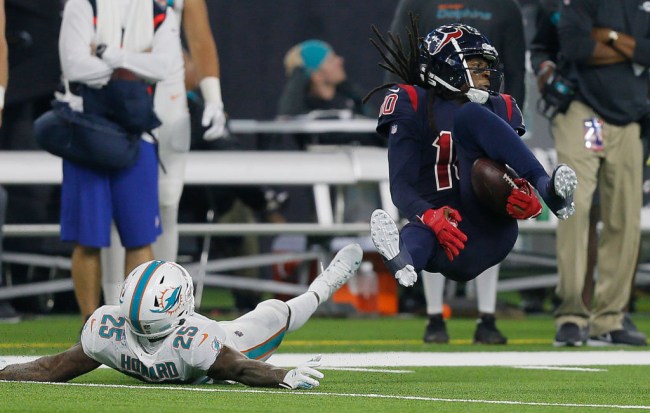 DeAndre Hopkins once again proved why he’s built different. In a Thursday Night Football 42-23 win at home against the Miami Dolphins, Hopkins hauled in six catches for 82 yards and two touchdowns. The two-time Pro Bowler would have eclipsed the 100-yard mark (for the fourth time this season) if it weren’t for a questionable call that negated one of the better catches you’ll ever see.

Midway through the third quarter, quarterback Deshaun Watson threw a strike to Watson down the left sideline. While closely shadowed by Dolphins cornerback Xaiven Howard, Hopkins made a wild circus catch that belongs in a museum.

The refs flagged Hopkins for offensive pass interference and the miraculous play was erased, much to Hopkins’ disappointment:

Here are some sage reactions to arguably the best catch you’ll see all year because just because it didn’t count, doesn’t mean it didn’t happen.

#Texans WR DeAndre Hopkins is so hilariously good at catching the football it’s just ridiculous. I know it doesn’t count. But I’ll watch it 100 times in a row and it’s still amazing.

Holy shit Deandre Hopkins has the best hands in the history of football.

DeAndre Hopkins is not of this world 🌎 pic.twitter.com/odHxwf5Si5

@DeAndreHopkins the best in the game !!

Since DeAndre Hopkins is having a big game…. Never Forget when he literally broke DeAngelo Hall's ankles after he was talking non-stop trash. This is legendary. pic.twitter.com/FQmZYO0b3e

Deandre Hopkins has the best hands in the NFL. No argument.

Deandre Hopkins has the two greatest catches in NFL history that were called back for flags. pic.twitter.com/H0xfTnTzab

This is the truth.

Doesn't mean it's not worth watching.