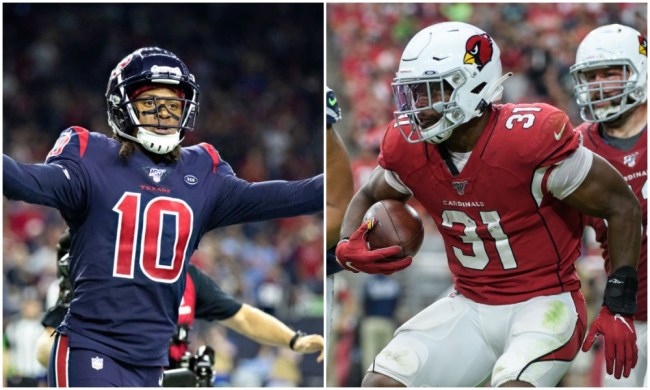 It has been three weeks since the Texans and Cardinals linked up to pull off one of the more shocking NFL trades in recent memory sending DeAndre Hopkins to the desert and bringing David Johnson to Houston, but the trade isn’t officially official just yet.

The hold up? Neither player has passed their physical yet.

While it would be highly unlikely for either player to actually fail their physicals, the fact of the matter is that both teams do have ‘an out’ if they decided not to go through with the trade. Pro Football Talk’s Mike Florio brought up that point in a recent mailbag.

As one source explained it to PFT, Johnson has had a preliminary physical performed on his wrist, which was injured in Week One of the 2017 season. He passed that portion of the physical, despite reduced range of motion that initially caused the doctor (not an NFL doctor) to hesitate. Johnson still has to take a physical as to the rest of his body.

Put simply, if Johnson or Hopkins fail their physicals, the trade will be off. As a practical matter, that gives both the Texans and the Cardinals an out, if they want to avoid the deal — and if they can persuade their doctors to give either guy an “F” on his physical.

The fact that there was draft picks involved in the trade makes the scenario even that much more interesting and unique. Arizona sent a second-round pick to Houston while the Texans sent a fourth-round pick to the Cards so this means that the two players must pass their physicals before the start of the NFL Draft.

If the two don’t pass their physicals before then, that means new terms will have to become part of the deal.

While it would make almost zero sense for this scenario to actually play out, it’s still worth keeping an eye on given the very unique circumstance the NFL and sports world finds itself in at the moment.