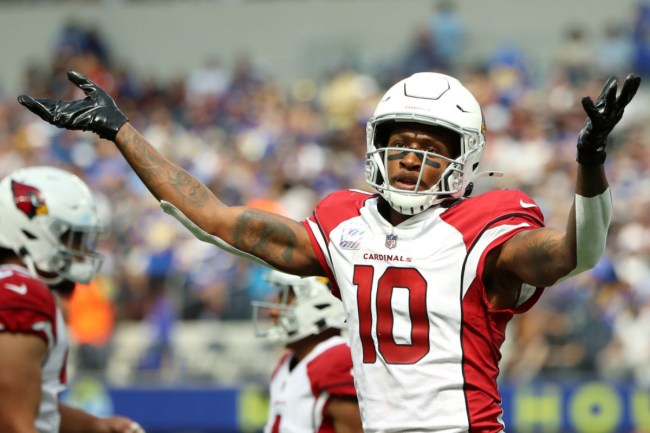 The Arizona Cardinals will be without star wide receiver DeAndre Hopkins for the first six games of the 2022 NFL season after being suspended for violating the league’s policy on performance-enhancing drugs.

While the news comes as a surprise to NFL fans, most had a very similar reaction to Hopkins being suspended.

The Cardinals pulled off one of the most surprising offseason moves of the year during last week’s draft when trading for wide out Marquise Brown. Now, with the Hopkins suspension being announced, Arizona’s move to get Brown makes a lot more sense.

Arizona also lost wide receiver Chris Kirk in free agency this offseason when he signed a new four-year deal with the Jacksonville Jaguars.

Unless Hopkins appeals the suspension and the league’s decision is reversed, Brown will undoubtedly be the top wide out on Arizona’s depth chart come Week 1.

As the Hopkins suspension was announced, NFL fans shared their reaction to the news on Twitter, with most people reacting with the same thoughts.

No wonder they wanted Hollywood Brown so bad https://t.co/ZMkE3J231H

So now the trade makes sense for why so high. They needed an immediate fill to help them compete while he’s out https://t.co/EIfmLWikxK

Let’s see what Hollywood Brown going to do with this opportunity 🧐 https://t.co/nPXpRmC7cK

Makes the trade make more sense…they still gave up too much for him though https://t.co/gfKTtFtqHl

So the Cardinals didn’t get Hollywood Brown just to appease Kyler Murray after all.

Hopkins wasn’t available for the Cardinals at the end of this past regular season or the team’s playoff game as he dealt with a knee injury. In his limited action, Hopkins did still manage to haul in eight touchdowns.