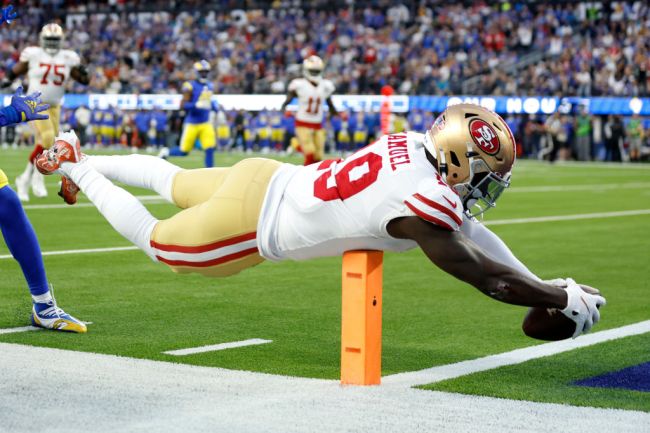 Since news broke of Deebo Samuel’s request to be traded by the San Francisco 49ers, NFL fans have been trying to figure out just where one of the league’s top wide receivers could wind up playing next.

The expectation among fans has been that the New York Jets seem to make the most sense for Deebo. They’ve been trying to trade for a receiver this offseason, they have the ability to pay him the money he’s looking for, and they have the draft capital to make a move make sense for the 49ers.

Unsurprisingly, it would appear that Deebo Samuel does not want to be a New York Jet. However, his most recent liked tweet could tell us where it is that he does want to end up.

After it was revealed that Deebo wanted a trade, the Action Network pointed out that the tweet Deebo had most recently liked showed him in a Dallas Cowboys uniform.

If the Dallas Cowboys managed to land Deebo Samuel, it would once again make them one of the league’s most dangerous offenses. They were expected to regress heading into next season after trading Amari Cooper, but this would quickly change that expectation.

Dak Prescott would suddenly have the combination of Deebo and Ceedee Lamb to throw to as one of the league’s best wide receiver duos. They’d also have Dalton Schultz, who proved to be a very reliable tight end this season, and Michael Gallup whenever he recovers from his knee injury.

Throw in the combination of Ezekiel Elliot and Tony Pollard running the ball and you have a truly potent offense.

The move would likely cost the Cowboys the 24th pick in the draft, the 56th pick, and another pick, but it could be worth it if they see a trade for Deebo as the move that finally gets them past the NFC Divisional Round.