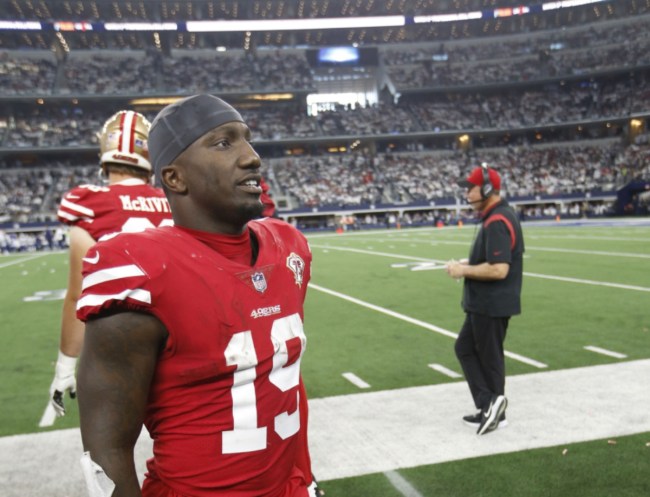 San Francisco wide receiver Deebo Samuel had himself a day against the Dallas Cowboys during the Wild Card round of the playoffs and did so with a unique shirt on underneath his jersey.

Samuel decided to rock a signature Tiger Woods red mock neck. It seemed to give him and the 49ers a bit of luck, too, as he picked up over 100 total yards and a touchdown during San Francisco’s 23-17 win in Dallas.

TW Legion on Twitter was the first to point out Samuel wearing the mock neck against Dallas.

While that’s far from the highest quality of pictures, you can somewhat make out the logo, despite it being wrinkled a bit.

This wasn’t the only photo showing the logo, however. Claire Rogers of GOLF did some serious digging on social media and found another, better photo of the ‘TW’ logo on the back of Samuel’s undershirt.

This one comes via Samuel’s fellow wideout in San Fran, River Cracraft.

So, why did Samuel decide to wear a signature red mock neck under his jersey? Because Woods is the GOAT, of course.

“I liked the turtle neck and it had his name on it,” Samuel told GOLF. “He the GOAT.”

It was a cool shirt, the red was the same as the 49ers’ red, and it happened to have the GOAT’s name on it, it’s as simple as that.