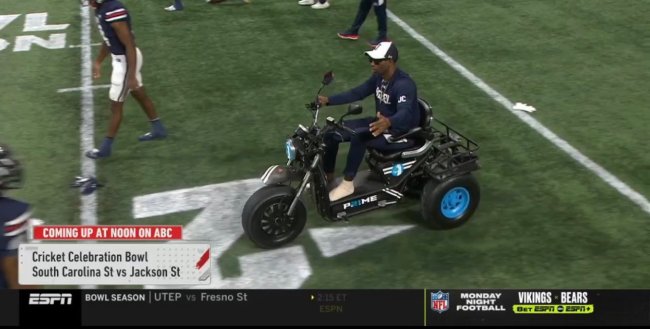 Deion Sanders’ second year as the head coach of Jackson State football has been historic. Not only did the Tigers flip the nation’s No. 1 overall recruit from Florida State earlier this week, but they are playing in their first-ever Celebration Bowl, which is essentially the HBCU National Championship.

In addition to the bowl birth, JSU won its first SWAC title since 2007 with an 11-1 record and made history during award season. What Coach Prime has done in two seasons is remarkable.

As was the vehicle on which he arrived to Saturday’s game.

Earlier this year, Sanders underwent foot surgery and missed a few games as he was recovering. Since his return, Coach Prime has had to use a scooter to get around on the sideline because he isn’t quite up to full walking strength just yet.

Throughout the season, he used a motorized wheelchair or one of those scooters with the handles on which you rest the injured leg and push with the other leg. Fairly standard.

Well, for Saturday’s Celebration Bowl, Sanders showed up in style.

He came out of the tunnel to a sold-out crowd at Mercedes-Benz Stadium in Atlanta on a custom “Coach Prime” scooter, complete with the lettering on the side. It looked more like a three-wheeled motorcycle than it did a scooter and it was awesome.

Deion Sanders on his way to steal your No. 1 recruit AND your girl pic.twitter.com/vfSaxpXtHw

As his players were warming up on the field, Sanders drove around and dapped them up on his three-wheeled, motorized Primemobile.

And it gets better. Coach Prime partnered with Aflac a few years back. He has the insurance company’s duck logo on both the side of the vehicle and on the front.

There are coaches and scooter, and then there's @DeionSanders and his scooter.

Mother of God this thing is a work of art. Prime Time knows how to observe practice in style. pic.twitter.com/joBgp66ZaM

There is nobody like Deion Sanders. The man is not only a marketing genius, but he knows how to make an impression. He is truly one of a kind.