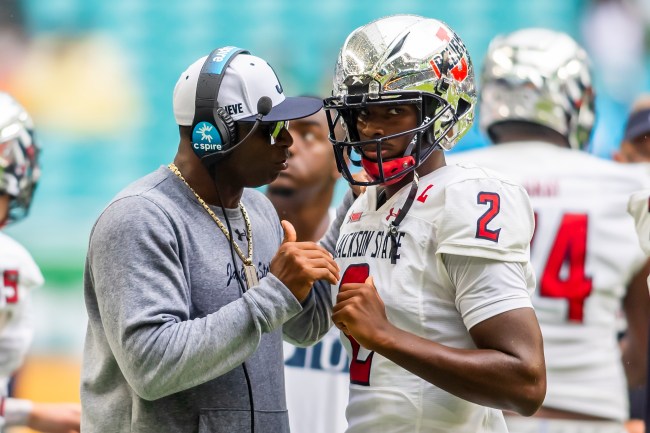 What Deion Sanders has done with the Jackson State football program in less than two years is remarkable. A large portion of Coach Prime’s success can be attributed to his son Shedeur and now they are being recognized for it.

Sanders, who took over the program in September of 2020, is 15-4 in his first two seasons with the Tigers. Jackson State went 4-4 in the 2021 spring season (due to COVID-19) and lost only one game this fall.

As a result, Jackson State won its conference for the first time since 2007 and earned its first-ever birth to the Celebration Bowl, which is essentially the HBCU national championship. That game will be held on Saturday against South Carolina State, and the Tigers are 10.5-point favorites.

Ahead of the postseason, Sanders and his son made history this week during award season.

Sheduer, who started at quarterback during all 12 games, was named the Jerry Rice Award winner on Monday. The award is presented to the national freshman player of the year in Division-I FCS.

He stiff arms the defender and then finds Keith Corbin III in the back of the end zone for the TD!

Jackson State is up 7-0 over Alabama State. pic.twitter.com/ZFmIuexALk

By winning the award, he became the first player from a Historically Black College and University to win the award. History.

And then, less than 24 hours later, Coach Prime was named the 2021 recipient of the FCS Eddie Robinson Award. The award is presented to the national coach of the year on the FCS level.

The 54-year-old Sanders becomes only the second HBCU head coach to win the award. Henry Frazier III won it with PVAMU in 2009.

Needless to say, what Deion and Shedeur Sanders have done in such a short amount of time is historic. Literally.