Deion Sanders Has Already Made Jackson State A Fortune In Advertising And Exposure, And He’s Not Done Yet 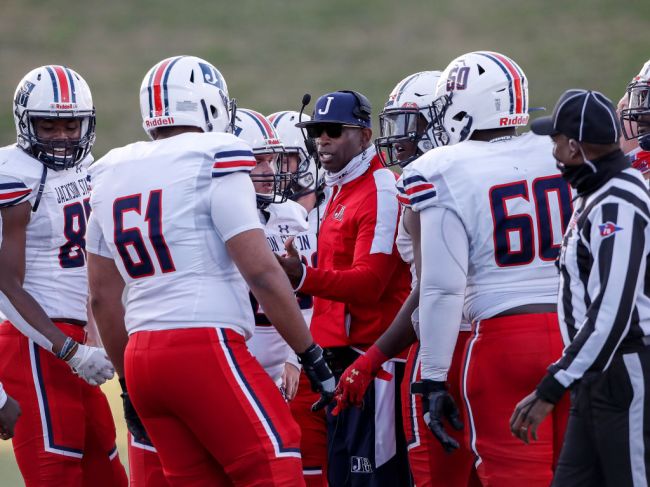 Deion Sanders was hired as the new head coach of Jackson State football in September and he has already made waves across the program and college football as a whole. The Tigers put on a show in their first game under Coach Prime, followed it up with a record-snapping upset victory and kept the momentum rolling to begin the year 3-0, but a three game losing streak and a forfeiture due to COVID-19 leaves them at 3-4 with one game remaining. No matter where the record stands at the end of the 2020/21 spring season, the hire has been a success.

A university spokesperson told USA TODAY Sports that the Jackson State athletic department has generated the equivalency of $185 million in advertising and exposure since Sanders was hired. To put the significance of that number into context, the university’s entire athletic budget during the 2017 fiscal year was south of $8 million— ranking 337th out of 347 NCAA Division I schools. The $7.6 million budget may have increased over the last four years, but the school has not released that information. Either way, even if you round up to $10 million, the “Deion Sanders effect” is pulling nearly 18 times its weight. That’s a massive improvement.

And Sanders isn’t done there.

According to a USA TODAY Sports report, Coach Prime has a whiteboard in his office that outlines 20 marketing targets. Whether they be a generic product or the name of a specific store, Sanders outlines things he and the program needs, and an outside marketing firm steps in to pursue potential deals.

SMAC Entertainment is a a multi-dimensional talent management, music, branding and production company, brings together former NFL strategist and marketing executive Constance Schwartz-Morini and Pro Football Hall of Famer and Emmy Award-winning television host Michael Strahan to create a major presence in the sports and entertainment arena. The firm was hired alongside Sanders in 2020 to help generate revenue for a financially deficient program in much need of upgrades. Items on the white board include insoles, coffee, and tractor supply— which likely alludes to field conditions.

Sanders’ presence in Mississippi has already been lucrative and will only continue to become more valuable. The state recently approved a bill that will allow players to profit off of their Name, Image and Likeness. If anyone knows anything about how to market yourself, it’s Primetime. Having him in the program and in the locker room will be a big asset.