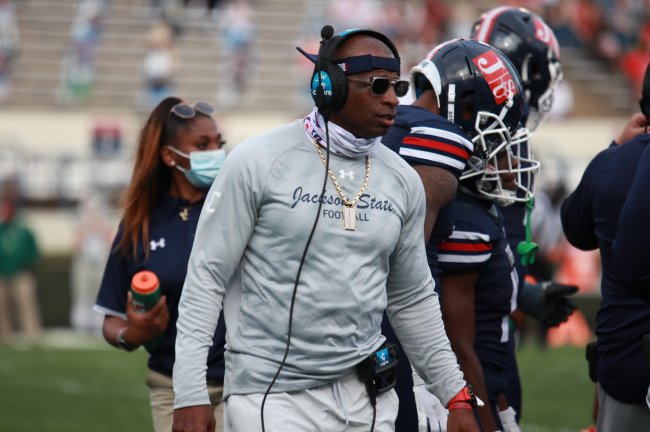 Jackson State football is a wagon. Deion Sanders’ Tigers are 3-0 and they’re dominating everybody, but Coach Prime’s time in Mississippi has been anything but ordinary. His debut took place after an unprecedented winter storm, a bizarre situation unfolded after the game, and his first road win broke Grambling State’s 16-game winning streak. The hot start continued with a with 43-7 win over Mississippi Valley State on Sunday.

Sanders went out there in warmups and looked like he could throw on the pads and take the field at 53 years old.

Deion Sanders looks like he could suit up and play for Jackson State today 👀pic.twitter.com/s3hfoXpjTZ

He was completely dripped out on the sideline.

Coach Prime is iced out 🥶⛓ pic.twitter.com/Ojmxdb3y0R

After kickoff, the game was over before it began. Jackson State jumped out to a 30-0 lead at halftime and never looked back. Junior wide receiver Daylen Baldwin recorded a career-high 128 yards and three touchdowns in the first 30 minutes.

As the teams went into the locker room, Coach Prime got down to Reverend Timothy Flemming’s gospel hit “Got The Devil Under My Feet.”

Jackson State is up 30-0 at halftime and Coach Prime danced into the tunnel 😂 pic.twitter.com/JIYCFaysu6

The Tigers took their foot off of the gas a little bit in the second half and allowed the Delta Devils to find the end zone late in the fourth quarter, but they answered with a pair of touchdowns on their own to extend the lead. As MVSU tried to close the gap on its final possession, a big man touchdown sealed the deal. Junior defensive tackle Jaumoine Crain laid a HUGE hit to knock the ball loose, got up and picked up his own forced fumble. As he took off down the sideline and into the end zone, he stopped for just a moment at the goal line to hit the Primetime shuffle.

Coach Prime loved the tribute and stays undefeated on the collegiate level. Jackson State will travel to Montgomery, Ala. for a 2:00pm CST kickoff against Alabama State.