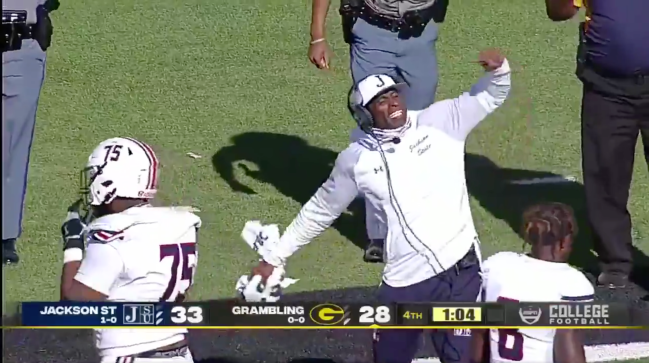 The Coach Prime era is off to a phenomenal start at Jackson State. Deion Sanders’ debut as head coach of the Tigers took place under unique circumstances and a bizarre situation unfolded following the team’s first win of the FCS Spring Season, but a win is a win and they didn’t stop there.

JSU entered Saturday’s road game against Grambling State as 10-point underdogs. Thanks to a late forced fumble at the goal line, the upset went down in Louisiana and Coach Prime’s squad held on to improve to 2-0. The win snapped the team’s five-game losing streak to Grambling — dating back to Nov. 3, 2102 — and snapping Grambling’s 16-game home winning streak — dating back to September 12, 2015.

PUT THE SWAC ON NOTICE!

The road Tigers went down 14-7 to the home Tigers but battled back with a 20-point second quarter and went on to a 33-28 victory. Storylines were abundant in the game, as Sanders coached his first road game in college football and his first Southwestern Athletic Conference game. For Grambling, it was their spring season opener after the fall season was postponed due to COVID-19.

Both teams battled back-and-forth down to the final whistle and the boys were HITTING.

The player of the game was Tigers running back Tyson Alexander, who finished with 184 yards and a touchdown on 17 carries. To average more than 10 yards per touch against a defense that led the SWAC in scoring last season is no small task. His touchdown came just before halftime to go ahead 27-14. Coach Prime didn’t want his team to take its foot off the gas and gave a rousing speech in the locker room.

Heading into the 2nd half and there’s no brick wall that stands a chance
JSU 27-14 GSU @DeionSanders @barstoolsports pic.twitter.com/HBxlmZhvTI

Sanders and Jackson State will next host Mississippi Valley State on March 14 in a game that was rescheduled due to COVID-19 issues at MVSU.