Deion Sanders Made His Coaching Debut At Jackson State In Style 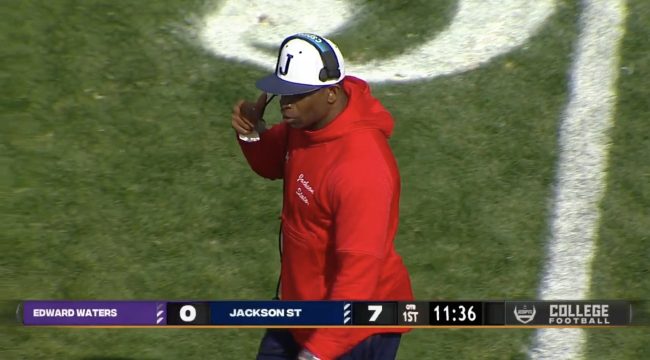 When Deion Sanders was introduced as the head coach of Jackson State University football, it was sure to be a spectacle. The 53-year-old ‘Coach Prime’ took over the program in September but made his coaching debut with the Tigers on Sunday after the fall season was cancelled due to COVID-19. His first day on the sidelines was nothing short of wild.

After breaking out his signature ‘Primetime’ high-step upon arrival, he called up his friend Snoop Dogg to get his team fired up before the game. Surely there aren’t any other D1 head coaches who can decide to just hop on FaceTime with Uncle Snoop in the locker room and have him actually answer.

Deion Sanders broke out the Primetime high-step and called Snoop Dogg before his first game at Jackson State 😎 pic.twitter.com/ltJf7cNlZ0

Once it was time to hit the field, the game was being played under unusual circumstances. Football is not typically played in February and for good reason. It’s cold. However, because of the global pandemic-induced postponement, the Tigers were set to suit up for the start of the spring season on the heels of an unprecedented winter storm in Mississippi. Campus was closed all week as temperatures well below freezing and up to eight inches of freezing rain, ice and snow covered the state capital. Temperatures started to warm up later in the week, but much of the state lost power, water or both and had not gained it back by the weekend. JSU was one of those places. There was no running water in the stadium around 10,000 fans showed up to watch Coach Prime’s debut against Edward Waters on Sunday.

Jackson is a frozen city. There is no running water at the stadium. Port-o-potties, hurriedly ordered yesterday, arrived this morning. Some ramps are partially iced over.

Nevertheless, the show went on and the Tigers looked fresh.

As Coach Prime and his guys were warming up before the game, Troy Aikman showed up to support his former teammate, making for a special reunion. How often does a NFL Hall of Famer hangout on the sideline while another NFL Hall of Famer coaches? Only Deion Sanders.

Once the game began, Jackson State went ahead 31-0 at halftime and never looked back.

Even with the cold weather, he received his inaugural gatorade bath.

After a 53-0 beatdown, the Coach Prime era began 1-0. But the day wasn’t done there and one of the more bizarre situations unfolded postgame.

While you’re here, it’s a good time to remind everyone that JSU has one of the best marching bands in the country.

Jackson State University’s ‘Sonic Boom of the South’ is set to perform at the inauguration tomorrow night.

All we need to see now is Primetime’s high-step during a Sonic Boom of the South performance.