The Amount Of Money That Deion Sanders Has Made The City Of Jackson, MS Is Truly Unfathomable 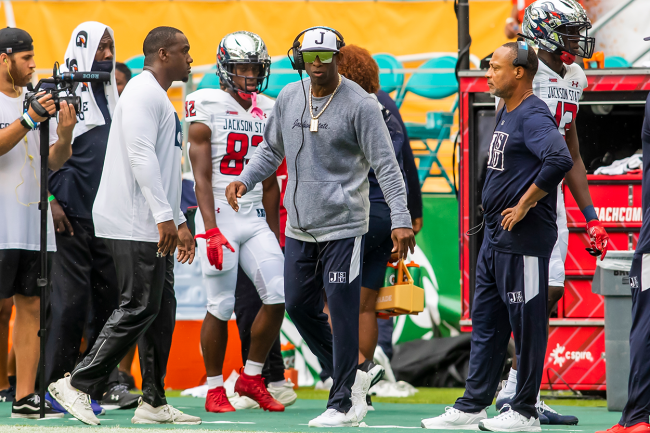 It had been 15 years since Jackson, Mississippi could claim a SWAC title in football. In only his second season as head coach, Deion Sanders was able to bring it back.

Prior to Coach Prime’s arrival, the Tigers were 18-37 in the last five seasons. Since he took over, they have gone 14-4, lost only one game in 2021, and claimed the school’s first conference championship since 2007.

It has been a remarkable turnaround by one of the biggest personalities in football.

On Saturday, Jackson State beat Prairie View A&M 27-10 in front of 50,127 fans. Attendance at the SWAC Championship was greater than every Group of Five conference and came very close to the Pac-12 and ACC.

The atmosphere was incredible.

Fans from far and wide descended upon the City of Soul, including those who were affiliated with the visitors. As a result of the consistent travel for games throughout the season, businesses in the area have seen a remarkable uptick in business.

In fact, according to Visit Jackson — the city’s official tourism council — Jackson State’s football success brought in an insane amount of money to Mississippi’s capital city. It estimates that the Tigers and their winning ways can be credited with approximately $30 million in revenue.

The winning ways, of course, can be attributed to Coach Prime. He came in, changed the culture of the program, the conference, and Historically Black College and University athletics as a whole.

Saturday’s win meant a lot to Sanders, his team and everyone for whom the butterfly effect of Jackson State touched along the way.

And, to make things even cooler, the revenue increase came at a really important time for the city. A lot of local businesses in Jackson were forced to close due to the COVID-19 pandemic. Over the past 10 years, the city has been on the decline.

Now, because of Coach Prime, the money is flowing once again. Remarkable.