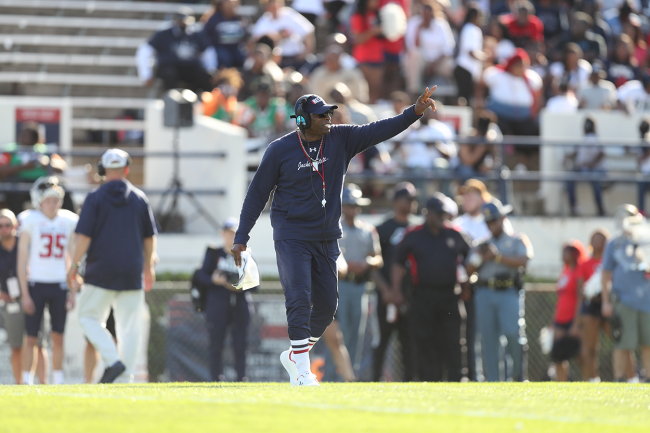 When No. 1 overall recruit Travis Hunter Jr. committed to Jackson State on Early Signing Day, it sent shockwaves across college football. Never in the history of the sport had a top-ranked prospect committed to play at an FCS school, let alone an HBCU.

Hunter, a 6-foot-1, 160-pounder is a freak athlete with the ability to play both cornerback and wide receiver. Since his commitment, he has showed his skills on both sides of the ball and as a dancer, and recently had himself a day at the Tigers’ spring game.

The impressive first showing from the true freshman has the FCS and entire college football world on notice and now he will turn his focus to the fall. Earlier this year, Hunter made a big announcement on the position he would like to play during his college career and it appears to becoming to fruition.

During an appearance on ESPN’s Keyshawn, JWill and Max radio show, head coach Deion Sanders spoke about his new weapon. While discussing his recruitment, Coach Prime revealed the one thing that he believes got Hunter to flip from Florida State to Jackson State.

Deion Sanders made a big declaration and said that Travis Hunter will play both ways at Jackson State.

Not only will he play on offense and defense (something that most people could have expected), but he will start on both sides of the ball. That’s impressive.

“After seeing our spring game, you start to understand, okay, I played two ways and this kid’s a two-way player and I know how to handle this kid,” Sanders said. “I understand his needs and wants and his athletic ability, also his conditioning and what he wants from the game. It was very apparent just seeing him and how he moves and plays. I don’t know if anybody else in the country would have started the kid both ways, but we will.”

Hunter has said in the past that, of the two positions, his preference is cornerback. However, after he said himself that he wants to play both ways, and putting on a show as a wide receiver in the spring game, it appears as though he locked up a spot on both starting 11s.

If anyone knows how to handle a two-way player, it’s Coach Prime. This is going to be fun!