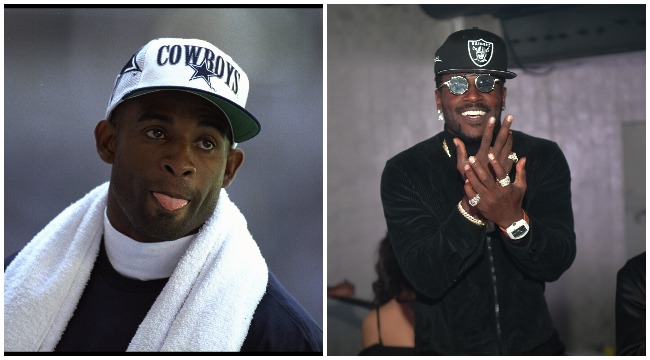 Deion Sanders, 1997: Coming off back-to-back Super Bowl titles with two different franchises. Playing out a seven-year, $35 million contract (the highest-paid defensive player in the NFL at the time). Perennial All-Pro. Become the only man in history to play in both a Super Bowl and a World Series.

Deion Sanders, 1997: Attempted to commit suicide by driving his car 40 feet off a cliff as his marriage was ending.

Mental health does not deal in the realm of success.

Sanders joined Paula Faris’ Journeys of Faith podcast last year to detail how he simultaneously had it all and nothing at all.

“Rock bottom for me was laying between two and three women at a time, but you get up unsatisfied…Laying right beside the person who said they love you, but she didn’t even know you was in pain. That was rock bottom for me,” he said.

Prime Time has now made it his mission to advise a wandering Antonio Brown in hopes the All Pro receiver can make an NFL return. The two sat down for a Bleacher Report segment and Sanders spoke about becoming “intoxicated” with his larger-than-life persona and it took him to the brink.

.@DeionSanders told @AB84 that he got lost in “Prime Time” during his career, hit rock bottom and became suicidal.

Sanders is glad AB never got to that point and commends him for getting help.

He is trying to help Brown back into the NFL @brgridiron pic.twitter.com/fLtmIqRS0b

Sanders recently vouched for Brown as the two worked out together, advocating for an NFL team to take another chance on him.

The NFL is currently investigating sexual misconduct claims against him by two different women and a burglary with battery after he and his trainer allegedly attacked a moving truck driver.