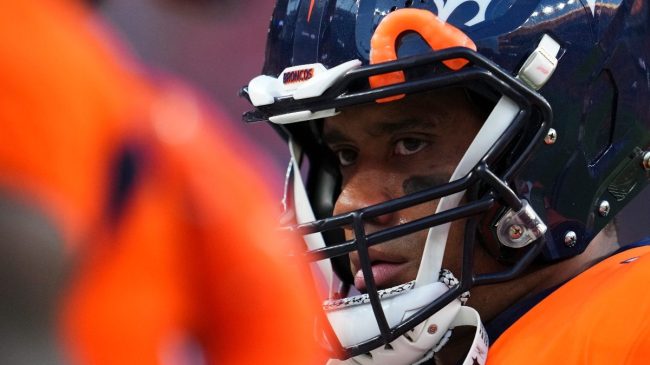 The Denver Broncos have had a rough Monday, to say the least. After suffering another terrible loss, the team learned that Russell Wilson had sustained an injury. As of now, his status is unclear for Week 7 and beyond as he receives an MRI on his hamstring. In the meantime, Deion Sanders may have predicted what has transpired well before Monday night’s game.

Tyler Wise shares a clip of Sanders on Barstool Sports as they run their regular “I Believe” segment. The Jackson State head coach delivered a prediction that sounded bonkers on Sunday morning. However, there’s a real chance that Deion Sanders was accurate with his take on Russell Wilson all along. Give it a listen below.

Deion Sanders? More like Deionstrodamus Sanders. Am I right!? That is a wild prediction about Russell Wilson in general. However, the Hall of Famer has two things right already. One, Wilson stunk it up on Monday Night Football and two, the Broncos quarterback is suffering what could be a “fairly significant” injury, per Tom Pelissero.

Additionally, we’ve heard Richard Sherman bashing Wilson all season long. Regardless, Sanders predicts more former Seattle Seahawks will join in. If that comes to fruition, then we might just have to ask Deion Sanders to predict the stock market too. Why not?

At the end of the day, Russell Wilson’s injury is still up in the air. It’s unclear whether or not he’ll be available for the Week 7 matchup against the New York Jets. If he misses time, the Broncos will have Brett Rypien fill in as the starting quarterback. Keep an eye on Wilson, as his injury situation is concerning for the team’s future.