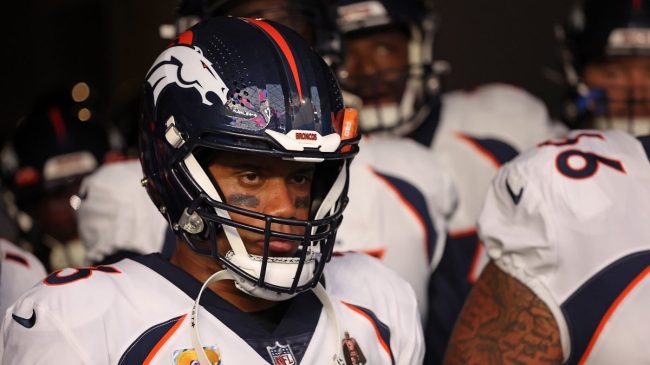 It’s been a rough go for the Denver Broncos this year as the offense has yet to come together. Russell Wilson has been a complete mess in the pocket and has faced some harsh criticism throughout the season. However, it sounds like things are going from bad to worse with the latest development unfolding.

Russell Wilson Could Have Sustained A ‘Fairly Significant’ Injury

According to Tom Pelissero, the Broncos quarterback is receiving an MRI on his hamstring. Russell Wilson is known to fight through the pain, but this injury sounds like it could be severe. If that’s the case, then Denver could be without their starting quarterback for the upcoming game against the New York Jets.

This was the concern pending tests today. Russell Wilson plays through pretty much everything. But his health will be worth monitoring — again — on a short week leading up to Sunday’s game against the #Jets. https://t.co/kzHxrcH0O7

The 2022 season has been a total blunder for the Broncos so far. Losing Rusell Wilson to injury could be detrimental, even though he hasn’t played well in Denver. Nothing is for certain right now. Everything hangs in the balance of the MRI results.

If Wilson were to miss time, then the Broncos would likely turn to Brett Rypien to fill in at quarterback. If not, then we could see Wilson back under center in Week 7. Regardless, based on how the season is going so far, it might be best for the veteran quarterback to take at least one game off to rest up.

We’ll see how it all goes down. If the hamstring injury is serious enough, then having Russell Wilson sit would be for the best. If not, then he may opt to push through. At the end of the day, the Broncos just need some consistent quarterback play.