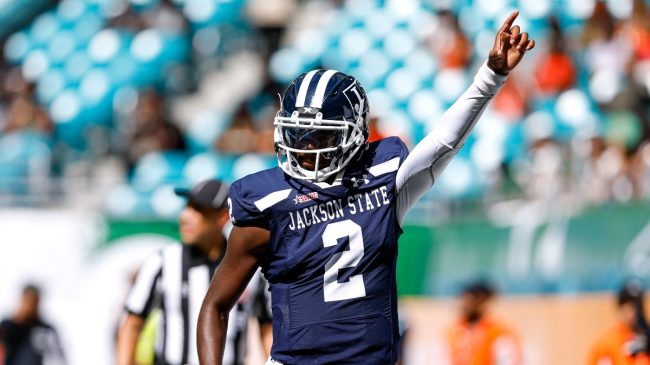 Shedeur Sanders is currently having a stellar season for the Jackson State Tigers. It has to be a cool moment for him and his father, Deion Sanders as they work together to put HBCU sports on the map. Everything is going right this season and it sounds like the young quarterback is ready to make a statement in the food world as well.

According to Front Office Sports, “Jackson State star QB Shedeur Sanders has launched his own ‘#2 BBQ Sauce.'” Additionally, Sanders’ company “will give a portion of proceeds to the Thurgood Marshall Fund.” An organization that supports students in attending HBCUs and other colleges.

The sauce comes with its own apron, and Sanders will give a portion of proceeds to the Thurgood Marshall Fund. pic.twitter.com/h3BZjaPjzP

So, the Jackson State quarterback is launching his own business while simultaneously helping those in need. Deion Sanders has to feel proud of his son, as Shedeur is truly beginning to make a name for himself on and off of the field.

In fact, there is a world where he could play quarterback for a much larger program down the road. That’s at least what Deion Sanders has indicated recently while he received plenty of hype to potentially coach a big school in the ACC. We’ll see how it all plays out, but the future is incredibly bright for both Deion and Shedeur.

For anyone interested in possibly purchasing and trying out Shedeur Sanders’ “#2 BBQ Sauce,” the Jackson State quarterback has already made a brief commercial.

Now with his own BBQ sauce for sale, we should see Deion and Shedeure Sanders continue lighting it up in the college football world.