Deion Sanders Eviscerates ASU For Scheduling His Team As Homecoming: ‘This Is Like A Money Game’ 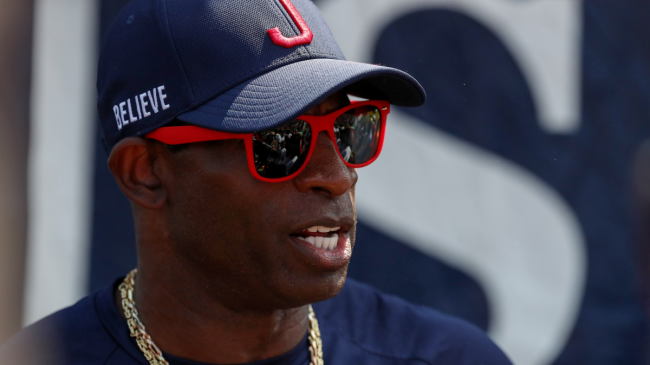 Deion Sanders was not happy to hear that Alabama State had scheduled his Jackson State Tigers as its homecoming matchup for the 2022 season. The head coach went on a rant about the disrespect, but it may just add fuel to a fire that’s already burning in Mississippi.

Now, homecoming is a time where family and alum can return to campus to celebrate their universities. It often comes with commemorations, in-game honors, and pre-game festivities. For those reasons, most homecoming matchups are scheduled for a game that you believe your program will win.

Hence, the disrespect that Sanders felt when seeing his team given the designation.

Coach Prime unloaded on Alabama State after hearing about the scheduling, and it doesn’t appear he’s going to hold anything back against the Hornets on Saturday.

Earlier in the week, Sanders commented on the upcoming matchup, saying, “I love the fact that we’re going to play Alabama State for their homecoming. I love it. Quote me.”

He took things a bit further on Monday, berating his future opponent with a bevy of insults.

This clip of @DeionSanders talking about playing Bama State for their Homecoming has me IN TEARS! He wants this game to get UGLY! This man called a CONFERENCE game a MONEY game 😂 pic.twitter.com/6oVsj1cY8S

“This is like a money game, isn’t it? This is like one of those games that you invite the opponent so you can make a lot of money… It was brilliant to invite us there, because you’re gonna make some money. But what comes along with money? All money ain’t good money.”

Sanders compares this upcoming CONFERENCE game to a money game where you pay an overmatched opponent to get smacked around for 60 minutes. The disrespect.

Coach Prime suggests that this will be a blowout, and he won’t take any mercy on his foe in terms of the scoreboard. He wants to give that homecoming crowd something to remember his Jackson State Tigers by.

Last time a team in Alabama scheduled his program as its homecoming opponent, the Tigers left with a 61-15 win over Alabama A&M. Sanders said after the game that he “wanted to make sure every light on the scoreboard worked.”

It doesn’t sound like he’ll be holding back against Alabama State, either.