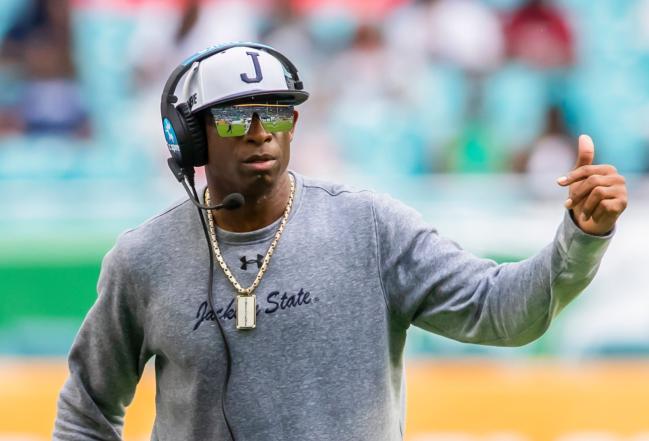 Before we even get into this story, I think it’s worth pointing out that there’s exactly a 0.00% chance that USC offers Deion Sanders its head coaching job. While he’s a big-time name, he has zero ties to the USC program and hasn’t done much thus far as the head coach at Jackson State. USC is still a job with a whole lot of pull, and the Trojans aren’t looking to take a risk in hiring Sanders.

Reggie Bush is to blame for the Deion to USC rumors, he’s the only reason anyone is even having this conversation. During Saturday’s edition of ‘Big Noon Kickoff,’ Bush shared that he believes Sanders can be the guy to return USC to its greatness.

While Sanders appreciated Bush’s kind words, he doesn’t sound like he’s really looking to make that sort of jump at the moment, he’s happy at JSU.

“I’m right where I want to be. I’m elated I’m coaching my sons. I’m loving this culture. I want to win, wish we would have won (this past Saturday at Louisiana-Monroe), but I’m locked in.”

Sanders can say those things, but if USC actually did come calling, it would be ridiculous for him to turn down that sort of opportunity. The Trojans won’t call, but Prime Time wouldn’t turn down a spotlight like that.