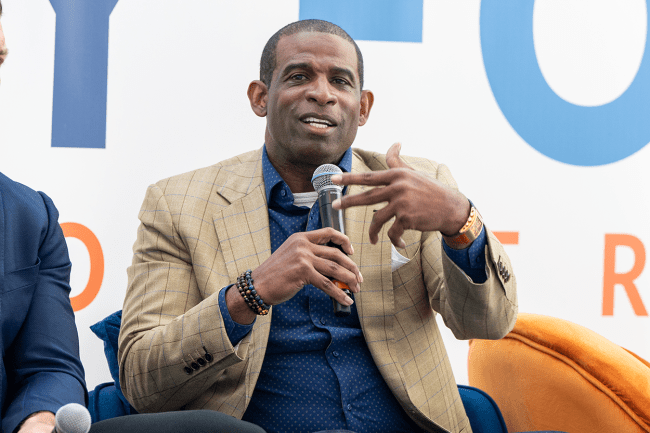 Deion Sanders had an unusual second year as the head coach of Jackson State football. Although he led his team to a program-best 11-2 record and a Southwest Athletic Conference championship, he was also fighting through significant health issues.

Sanders, who stepped away from the sidelines in September, took a few weeks off of coaching because of a health scare. He was hospitalized with discomfort stemming from blood clots in his left foot.

After discovering the issue, Sanders underwent surgery to have two of his toes amputated. He shared details from the operation along with graphic footage of the procedure.

Fortunately, Sanders was okay. He was able to get back to coaching but had to do so, at first, in a wheelchair and then with an amazing, custom ‘Coach Prime’ scooter.

However, to get to that point was not easy.

Sanders spoke about his recovery and struggles with painkiller withdrawal early last month and recently gave details about his significant weight loss while recovering.

In an appearance on the Rich Eisen Show, Sanders said that he isn’t done high-stepping just yet. He also discussed how much weight he loss and gained back while in the hospital.

“I’m moving slowly but surely and I’m moving briskly,” Sanders said. “I really am. I’m on my elliptical again because I had lost like 40 pounds, Rich. When I was in the hospital, I lost 40 pounds. I was eating nothing but apple sauce. I lost 40 pounds, but I gained 50 back. Now I can’t fit in my suit, so I’ve gotta cut down.”

Ultimately, Sanders is down two toes but back to full health and has begun his third year as head coach of the Tigers. Here are his full comments on the Rich Eisen Show: