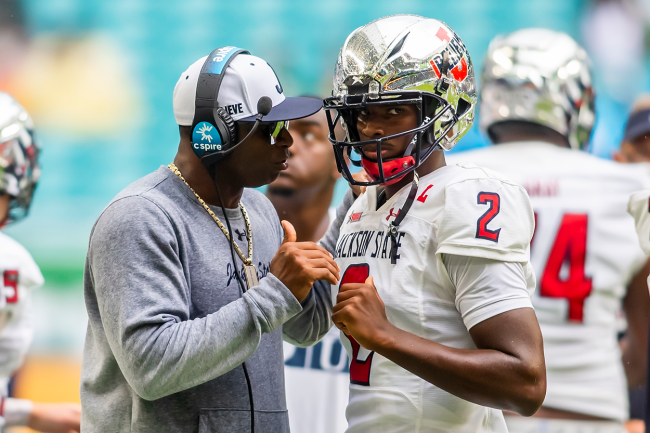 Jackson State football is coming off of the best season in program history and carries itself with some serious swagger. Not only does head coach Deion Sanders lead a culture of humility and hard work, but he also lets his players express themselves more than most other coaches in the country.

The Tigers are always always having fun. Whether it be a fistfight between two linemen that Sanders lets play out, a dance-off between the two sides of the ball, or a freestyle battle that results in some hilarious bars, there is always something going down in Jackson.

On Thursday, less than a week after roasting his son Shedeur over his new hairstyle, Coach Prime got into it with him again. This time, however, it was planned.

Deion Sanders and Shedeur Sanders had a rap battle live on Instagram and things got testy in a hurry.

Both sides had time to write their lyrics before performing against one another and they both bought the heat, but there were some accusations made against Coach Prime. After Shedeur and Deion spit their initial bars, the former accused the latter of not writing his own lyrics.

Shedeur said that his father didn’t write his own lyrics back in the day, to which Deion was quick to respond that there is no “back then” because he wrote his lyrics now. From there, a back-and-forth went down between the two about old school vs. new school.

Shedeur got a little bit salty as Coach Prime tried to explain his bars and the whole thing ends with Deion Sanders claiming victory. Take a look and decide for yourself who came out on top:

Shedeur remains adamant that he won the battle despite what people might have said on the live stream. He also said that he will drop his song and then we will see how many views it gets compared to his father’s.

No matter who won between the two, we are all winners for getting to witness the hilarity. To make things even better, this is not the first time that Deion rap battled one of his own sons. He and his other son Shilo once got after it around the pool last fall.

The whole thing is entertaining and the Sanders family dynamic is super funny. Getting behind-the-scenes looks into their lives never fails to provide a laugh.