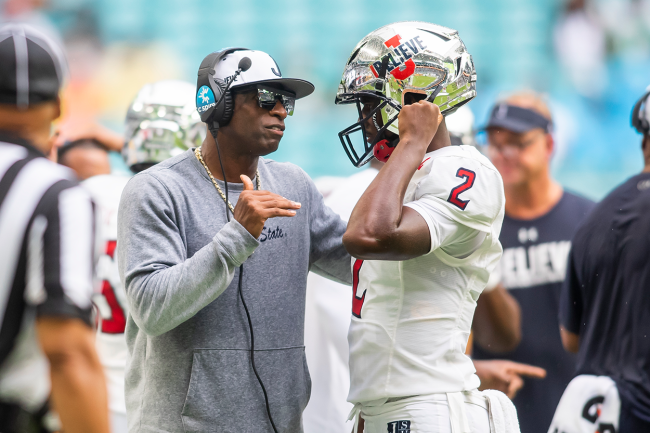 The Sanders family had a special relationship with Dolph.

As did the Tigers. Just a few weeks before his death, the South Memphis Kingpin celebrated a win with the team in the locker room.

Earlier in the week, after the news broke, Deion Sanders spoke with his team about what it meant to him and the program.

He also penned a prayer in his honor.

“Lord help us as a people stop the hate, the violence and the hopelessness. When we realize we matter others will as well. Lord help us right now.”

On Saturday, Shedeur, who is also the starting quarterback, described what he meant to his family. Coach Prime even called Dolph one of his son’s “dearest friends.”

“Usually with guys and celebrities and stuff like that, they’re not going to be real with you a lot of times,” Sheduer said. “(Young Dolph) was one of the realest persons I know. It’s just a different relationship and somebody told me on the sidelines ‘do it for Dolph.'”

Here is a look at the cleats that Sheduer wore in the 14-point win over in-state rivals Alcorn State:

Shedeur Sanders rocked a pair of Young Dolph themed cleats in Saturday’s win. He and Coach Prime explain the quarterback’s connection with the rapper. pic.twitter.com/hYBkMsIGTz

After the game, which was one of the most important in school history, the team celebrated in the locker room. While doing so, they honored Young Dolph by bumping his music.

Dolph owned all of his royalties, so streaming his music directly helps his family.