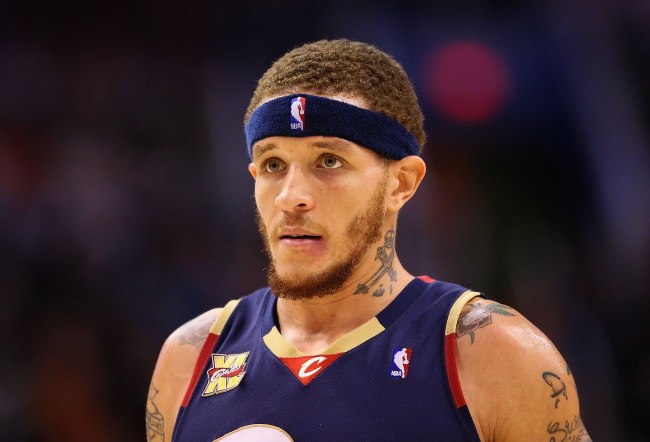 It’s almost impossible to imagine that the guy yelling incoherently in handcuffs on the side of the road after getting stomped out once paid for his mother to get her Master’s degree, bought a home for his brother in Maryland, and put his sister through college.

Delonte West, who a decade ago revealed his lifelong battle with bipolar disorder, reminded us that fame and fortune are no remedy for mental illness when he allegedly hit another man with a glass bottle before getting rag-dolled in the middle of a busy road.

Apparently Delonte West was seen getting beat up in the street this Morning. I went to school with him and it’s crazy to see just how his life has gone downhill since the NBA. pic.twitter.com/chm6Sbu9h6

While many praised former St. Joe’s teammate Jameer Nelson for his “concern” after posting a message on Instagram, I couldn’t help but roll my eyes after reading, “all we can do now is pray for him and his family.” Actually that’s not all you can do.

Phil Martelli, who coached West and Jameer Nelson for three seasons at Saint Joseph’s, was a bit more proactive in his response, claiming that he reached out to his “basketball network to get the professional help Delonte needs.”

But, according to an article from Shams Charania of The Athletic Tuesday, that help may be difficult to administer:

From West’s former teammates and coaches to team officials, all have run into the same issue over and over with him. A trip for him to seek help is scheduled and booked, West agrees upon it, and then he cancels. “He has to want to be helped,” said one person directly involved in setting him up with assistance. One of his former teams, according to a person, tried “too many times to count.”

Earl Watson, who was a teammate with West on the Sonics in ’07-’08, revealed that everyone knew something was awry, but no one was able to break through.

Every team & teammate Delonte has ever had failed him! I admit I was one of them because we all knew! Therapy, mental health or life coaching, however you phrase it, is ok & acceptable! Let’s show our strength by owning our weaknesses. Mental health is a community issue! All in!

Delonte West, who made an estimated $16 million in his NBA career, first raised serious concerns about his mental health in 2015 when he was spotted outside a Houston Jack in the Box wearing no shoes and a hospital gown over his flannel shirt looking genuinely disillusioned.

When a fan approached him and asked ‘Are you Delonte West?’ Delonte responded, ‘I used to be, but I’m not about that life anymore.’