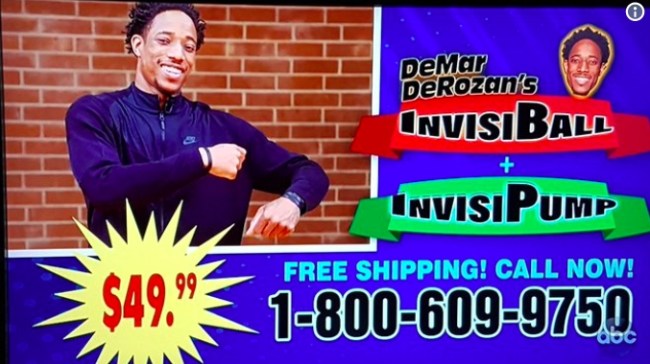 I’d imagine DeMar DeRozan watching the NBA Finals this season is like a jilted ex watch his former partner suck face with the Bachelor on national television, declaring to the world that “no one has ever made me feel this way” while eating gelato in the Amalfi coast and doing that infuriating jump hug thing that no real people do.

DeRozan, who spent nearly a decade with the Raptors, admitted to being “extremely hurt” after being traded to the San Antonio Spurs, only for his former team to reach the NBA Finals for the first time in its 25-year history. My empathy for DeRozan only grew when I saw that he’s apparently been vacationing alone while the Raptors are three wins away from basketball supremacy.

To add insult to injury, just ahead of Game 2, Jimmy Kimmel Live: Game Night aired a sketch featuring the 4-time All-Star that was filmed a year ago and was never put on air. The sketch featured DeRozan promoting a fake product called the “Invisiball.”

It doesn’t take a detective to recognize that the timing of the airing was intentional. DeRozan and his agent, Aaron Goodwin, felt the timing was a low blow and urged Kimmel to pull the sketch. Goodwin told The Athletic:

“We felt it was extremely insensitive to the fact that DeMar’s (former) team is playing in the Finals. They made it clear to us that it was funny to them, although it wasn’t funny enough for them to use a year ago when they shot it,” Goodwin explained. “We even asked them, ‘If you’re going to air this thing, put up a disclaimer that, for whatever reason, you’ve had this footage for over a year and you decided to use it now.’ And they refused to do that.”

Kimmel has yet to respond to the gripe.