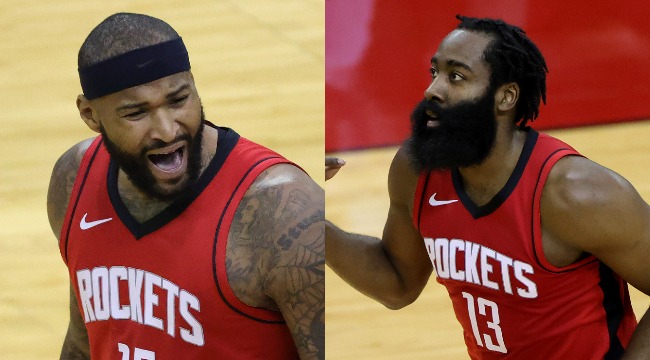 When the man who led the league in technicals and has been ejected more than a drunk sorority girl on a mechanical bull is the voice of reason, you know Houston has a problem.

James Harden has found a new home with Kevin Durant and Kyrie’s ghost in Brooklyn after treating the Rockets franchise with all the respect given to a substitute teacher who wants to continue the lesson plan.

First-year Rocket DeMarcus Cousins is understandably not happy about Harden treating him like his fifth option for prom, and said as much during a press conference this week.

#Rockets Demarcus Cousins on the Harden situation & public comments last night, if he feels betrayed after signing here. “I don’t feel betrayed at all, my interest (in signing here) was playing with John Wall to be brutally honest.” (More in video below). @SportsTalk790 pic.twitter.com/cBNGbcj7ML

“Obviously, it’s disrespectful, but everybody has a right to their opinion. We feel some type of way about some of his actions.

As an NBA fan who has no vested interest in the well-being of either the Nets or Rockets, this is an ideal situation. What is going to happen in Brooklyn with three of the most sensitive stars this league has ever seen will be nothing short of must-watch television. Sending strength to Steve Nash.