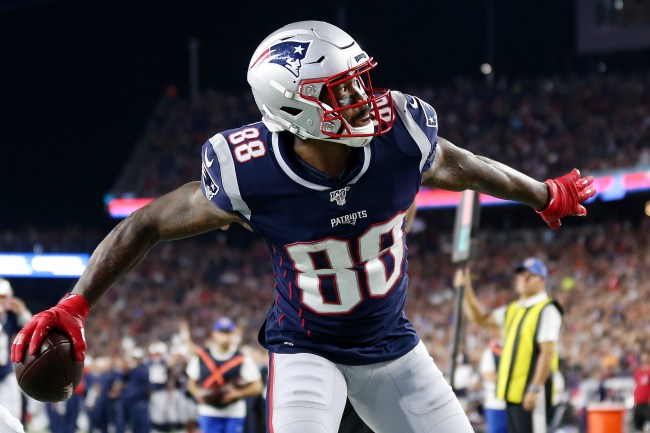 Demaryius Thomas has been one of the more consistent wide receivers in the NFL since coming into the league as a first-round draft pick in 2010. After gaining a bunch of yards and scooping up Pro Bowl appearances during his glory days with the Denver Broncos, the now 31-year-old Thomas has found himself bouncing around over the past couple of seasons, playing for the Houston Texans for half of last season, and then, following an Achilles injury and near deadly car crash, going from the New England Patriots to the New York Jets this year.

While Demaryius Thomas has found a new home with the Jets, it came after a four-month long stint with the Pats, with the wideout taking part in OTAs and training camp before the team released him following the preseason, signed him for two more days, then traded him to the Jets. Given the “cup of coffee” Demaryius had in New England, it’s only natural that he’s upset with how things ended with the reigning Super Bowl champs.

With the Jets and Patriots playing one another this weekend, Thomas was asked by Manish Mehta of the New York Daily News about his thoughts on his time with New England. His reply? Well, he didn’t sound too thrilled with how it all went down, blatantly calling it a “waste of time” for him.

“It was insulting, for sure,” Thomas told Manish Mehta of the New York Daily News Wednesday about the machinations of his exit from New England. “Once I got cut (on August 31), I could have just come here (to the Jets) and not stayed there and re-sign. When they re-signed me, I was thinking that I was good. Two weeks later, I was gone. So, it’s like, ‘Why did I waste my time?’ Because at the end of the day, it was kind of a waste of time for me.”

It’s hard to argue with Demaryius Thomas here. Imagine being in his position after working himself back from a major injury, then, in the twilight of his career, thinking he had done enough to prove to the Patriots that he still had plenty of gas left in the tank — only to get cut. The way Bill Belichick communicated the situation really upset Thomas.

“It was disrespectful to me,” Thomas said. “Like, you know, you could trust me and I could trust you. You told me when you cut me at the (final) cut, sit around you’ll bring me back. And I stayed. I could have easily become a Jet once I got cut…. I could have been here the next day after I got released. But I chose to stay.”

“Coach (Belichick) came up to me and was like, ‘Uh, we got too many guys. We can’t get the ball around enough and we’re going to trade you to the Jets,’” Thomas said. “And that was that…. Ain’t no reason to yell. They’ve won championships without me. I was only trying to be a part of something that was going to be good when I was there… They’re doing a hell of a job.”

Sure, Demaryius Thomas gives props to Belichick and the Patriots there at the end, but, deep down, it’s clear he’s a little mad about being treated like dirt. Now, whether or not he uses that as fuel for the upcoming showdown is left to be seen, but something tells me he’ll be playing with a little extra motivation this week.