Photos Of Demaryius Thomas’s Wild Car Wreck Have Surfaced And How Did He Walk Away Not Dead? 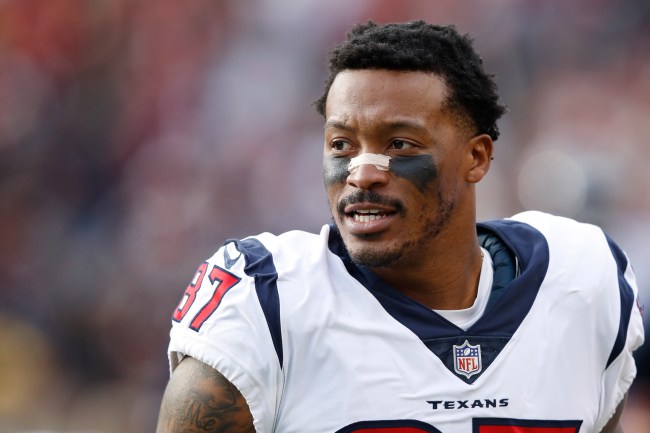 Former NFL wide receiver Demaryius Thomas should count his lucky stars for a February 16th car crash that could have killed him and the two passengers with him.

Days after being released by the Texans, the 31-year-old was driving over 70 mph (twice the speed limit) around 12:20 a.m. near downtown Denver when his SUV veered off the road and flipped end over end after hitting a median. Thomas walked away without any serious injuries, but one of the two passengers he was with suffered serious injuries.

As #kdvr first reported Demaryius Thomas charged with a felony for single car crash that injured himself, and 2 passengers, another man and a woman. Will likely be in court this afternoon. pic.twitter.com/s7RVTGjKiu

According to ESPN, Thomas pleaded guilty to careless driving resulting in injury (after pleading down from a charge of vehicular assault) and will have to pay a $300 fine, additional court costs, complete 50 hours of community service and be on one year of probation.

Whatever the punishment, it’s hard to believe that Thomas doesn’t feel like he’s got a second lease on life. Check out the damage.

Demaryius Thomas Crash Scene Photos Show Gnarly Wreckage Demaryius Thomas is lucky to be alive today — let alone healthy and ready to play in the NFL — 'cause TMZ Sports has obtained pics of his car crash … and the… https://t.co/ChUSVpYs3U #beauty #cosmetics #entertainment pic.twitter.com/FFEsgpaJEA

Take a look – this is the crash that sent former @Broncos wide receiver Demaryius Thomas to the hospital this weekend. His car rolled near the Pepsi Cener. Police are still investigating. Pics from Keith Wood. pic.twitter.com/jmEhIsIxvr

After the incident, Thomas released a statement claiming he considers Colorado a second home and apologized for putting its people at risk.

It was important for me to accept responsibility for my careless driving. I personally promise I will never put anyone at risk with that type of driving going forward.

It remains to be seen whether Thomas plays in the NFL again after tearing his left Achilles tendon after seven games with the Texans. These shenanigans won’t help his case.