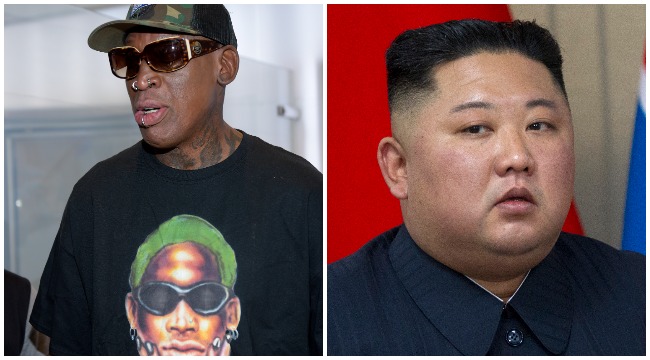 Dennis Rodman told Mike Tyson on his Hotboxin’ podcast recently that the intention of his 2013 trip to Pyongyang, North Korea was to decrease political tensions and sell democracy to a Stalinist dictatorship.

The 58-year-old Rodman went to Pyongyang in 2013 with the Harlem Globetrotters and dignitaries, all while not knowing one thing about the secretive state.

“I’m thinking I’m going to do an autograph show or play basketball. I ain’t know anything about North Korea, stupid as f**k, right?,” he said.

Rodman met Kim Jong Un at the Harlem Globetrotters game, and the North Korean leader asked Rodman to sit with him separately in what Rodman describes as “king chairs.”

Kim Jong Un and Dennis Rodman is still the weirdest and most unlikely friendship in human history pic.twitter.com/6uX85Ezttk

“Next thing you know, 22,000 North Koreans stand up and start clapping, I mean loud, and they’re cheering. And I’m thinking they’re doing it for me. And I’m like ‘Oh, shit,’ so I start waving, and they said, ‘No, that’s for him.’

Once acquainted, Kim Jong Un chatted with Rodman through a translator about their shared love for the game of basketball. That’s when Jong Un delivered Rodman a brutal back-handed compliment.

“He said, ‘We asked Michael Jordan to come, but he wouldn’t come so we asked you.'” 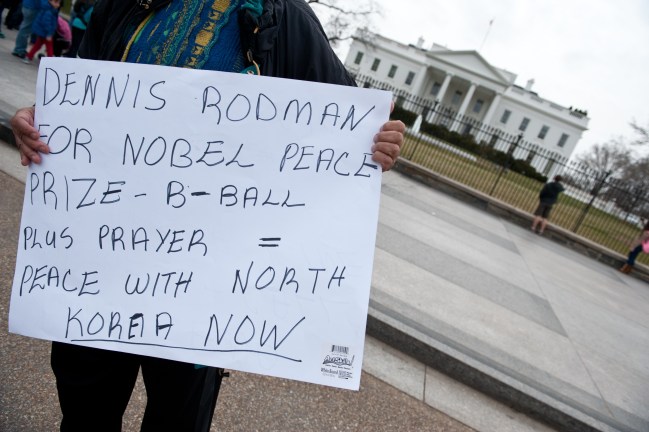 After the game, Rodman claims Jong Un asked him to turn up.

“Let’s have dinner tonight. A little karaoke and have some vodka, some hot toddys and stuff like that,” Rodman says Jong Un told him.

“Next thing I know, we are having dinner and we are drunk as sh*t, he starts singing karaoke and I have no clue what the f**k he’s talking about.”

“Everyone starts clapping, and he has this 18-piece women’s band. I mean these f*cking girls are HOT HOT, and the whole time they played one f*cking song. One song! It was the f*cking theme from Dallas. I was like, ‘What the f*ck.'”

“I said, ‘Here are seven songs I want you guys to play next time I come here. It’s Pearl Jam, Van Halen and Rolling Stones…’

I go back the next time and they play all those damn songs.

And we’ve been really good friends ever since that.”

“The politics, I don’t get involved with that,” Rodman said. “I came here to bring sports.”

I highly suggest listening to the entire hour of Rodman’s appearance on the Hotboxin’ podcast with Mike Tyson. You can listen to his bit about North Korea at the 33:10 mark.