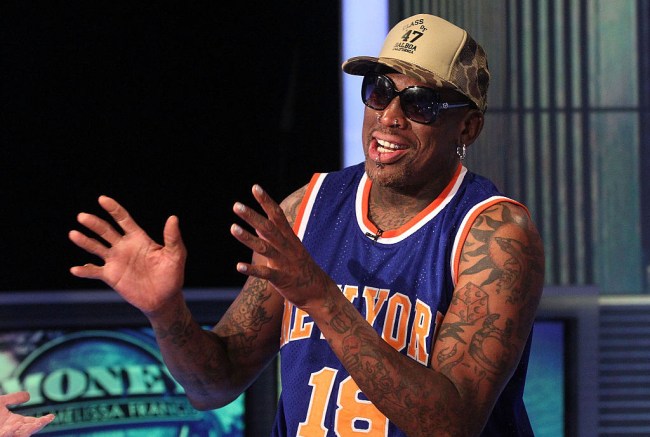 The world of sports is filled with stories that seem too bizarre to be true, whether we’re talking about Manti Te’o’s nonexistent girlfriend, Dock Ellis throwing a no-hitter while tripping on acid, or basically everything O.J. Simpson has done. However, I’m not sure if anything comes close to topping one of the most absurd relationships of all: Dennis Rodman’s bromance with Kim Jong-un.

Kim, who loves basketball as much as he hates basic human rights, struck up a friendship with Rodman when the famously flamboyant player made a visit to North Korea in 2013. While Kim could have pulled a Mr. Swackhammer and forced his guest to play in games for his own amusement, the two established enough of a bond that Rodman eventually played the unlikely role of diplomat to help free an American prisoner.

Rodman (unsuccessfully) tried to persuade Barack Obama to reach out to Kim when he was still in office, and if Donald Trump does actually meet with the dictator in Singapore next week (and that’s a big “if” based on their past behavior), one of basketball’s most infamous bad boys has offered to bring his expertise to the summit.

According to The New York Post, Rodman is thinking about booking a flight to Singapore in case Trump has the impulse to call upon him for his services next. It might sound absurd, but Rodman did appear on The Celebrity Apprentice, and one source pointed to one key factor that could make the scenario reality: television ratings, which seem to serve as kind of a presidential dog treat for Trump.

I’d love to say I’d be shocked if this happens, but after the past couple of years, I’ve reached a point where I can no longer be surprised by anything related to politics.