Move Over, LeBron, Dennis Schroder Is Now The Lakers’ Best Flopper After Getting Devin Booker Ejected 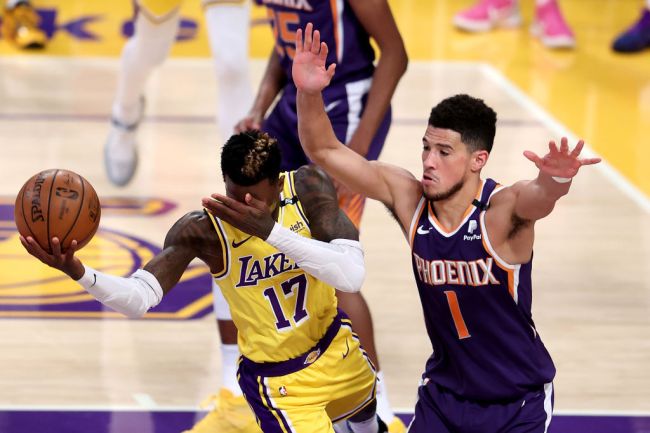 Devin Booker was ejected during the Suns’ loss to the Lakers in Game 3 on Thursday night for being a part of one of the better flop performances you’ll ever see courtesy of Dennis Schroder.

Late in the fourth quarter, Schroder drove to the basket on Booker and as he went up to try and attempt a layup Booker gave him a shove that wouldn’t have phased a toddler. Schroder decided to sell the foul by rolling over on the ground not once, but three times and putting his face in his hands for a brief second before looking up toward the officials hoping to get more than just a personal foul call on Booker.

The refs played into Schroder’s theatrics and gave Booker a flagrant 2 and ejected him from the game.

Devin Booker was given a flagrant 2 and was ejected for this push of Dennis Schröder. pic.twitter.com/dJBseyJGkW

Flopping is a real problem in the NBA, players on every team have started overselling contact because the officials give them the calls, but I’m convinced the Lakers rehearse some of this stuff.

LeBron James’ elite flopping ability has clearly rubbed off on some of his teammates. LeFlop has already shown off his acting ability during the series against the Suns, so Schroder stepped in on Thursday night to play his role as lead flopper.

Players had to be separated after a CP3 loose ball foul on LeBron. pic.twitter.com/KpFxOPco6r

Booker absolutely put his hands on Schroder, but to think that play warrants a flagrant 2 call and an ejection is absolutely insane.

James and the Lakers will get these sorts of calls until the end of time. The NBA suffers if LeBron and the Lakers suffer, so the league simply will not let that happen.