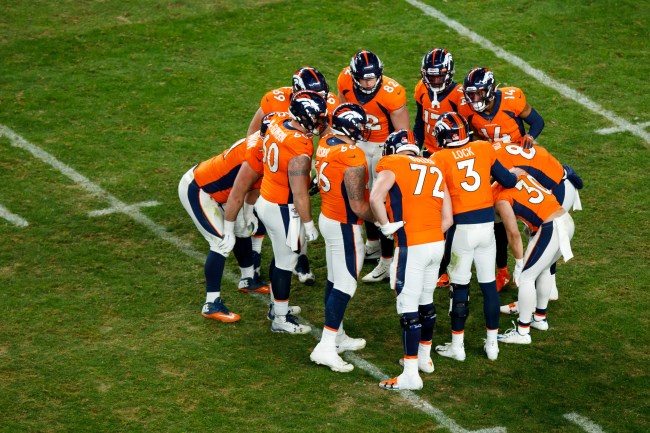 In the wake of the Detroit Lions being mocked for installing plexiglass barriers in the locker room in a sheepish effort to combat COVID, the Denver Broncos have decided to take their “security theater” up a notch.

On Monday, the team introduced what some are referring to as the Mile High Mist, a security measure that is essentially a marriage between a sanitizing mister and a metal detector.

But first, we sanitize. pic.twitter.com/HIO4epiyyH

Aric DiLalla, a writer for the Bronco’s website, described how the team hopes the device will work.

This disinfecting spray helps protects the players from COVID-19 by killing microbes and pathogens instantly by forming millions of nano-crystalline structures.

Players walk through the non-toxic spray as they walk out to the practice field for a walkthrough or practice.

We’re told the booth is spraying a product called “MicroSURE” — which is touted as a powerful nontoxic disinfectant that kills viruses like E.Coli, Staphylococcus aureus and Coronavirus upon contact.

Sanitizing clothes and preventing microscopic droplets of moisture that escape through the mouth and nose are two different animals. The more effective measure will likely be the proposed new face mask the NFL is pitching to players to test out in training camp. But probably not.

The Mile High Mist is getting Mile High Dissed on the world wide web.

Can we have these in schools as well? Or is this just for the super rich?

Especially when inside, social distance. These guys are bunched up, and I presume they were inside, as well. Doesn't much matter if you sanitize your clothing after breathing in and out droplets at close range.

I, too, spray myself with water on my head every time I go out into the world to "sanitize" myself.

This is just Axe body spray, admit it

Tears of people who refuse to mask up

But first, I wash my hands. pic.twitter.com/mtHFTi8W9G