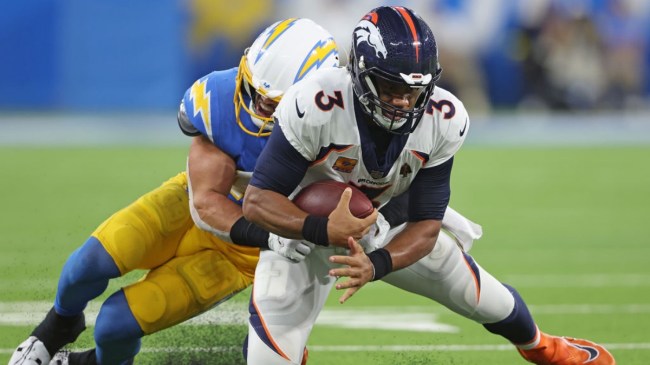 Things just went from bad to worse for the Denver Broncos offense.

Throughout the first 6 weeks of the NFL season, the shocking offensive struggles of the Denver Broncos have been one of the biggest stories in the league.

The Broncos offense was expected to make massive improvements this season. They went out and made a massive trade for Russell Wilson and brought in the Green Bay Packers’ offensive coordinator to take over as their head coach.

It was supposed to turn things around for a team that had clearly been held back by their offense last season as they were led by a defensive-minded coach and the combination of Drew Lock and Teddy Bridgewater at quarterback.

The improvements just haven’t come and now their offense will be facing a new challenge this week.

According to a report, the Broncos have decided to hold Russell Wilson out of this weekend’s game as he recovers from a hamstring injury.

While Russell Wilson wanted to play despite a hamstring injury and did everything he could to play, the Broncos HC Nathaniel Hackett will hold back the 9-time Pro Bowl QB vs. the Jets to allow him to heal and prevent a lingering injury, per sources.

Brett Rypien gets the start. pic.twitter.com/UR11TisM8S

In Wilson’s place, Brett Rypien will get the start for the Broncos. Rypien actually has started for the Broncos before. That start came in his 2nd week in the NFL and interestingly also came against the Jets.

It wasn’t the most impressive game statistically with Rypien throwing 3 interceptions, but he did throw for a panr off touchdowns and managed to lead the Broncos to a 37-28 win.

The Denver Broncos will be hoping he can repeat that result as they try to avoid starting the season 2-5.