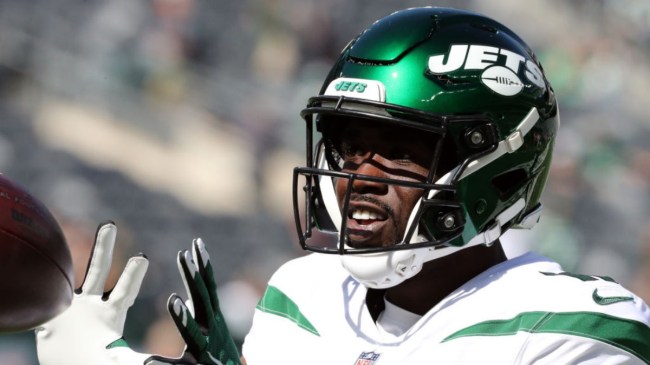 Those struggles and the Jets continuing to bring in talent at receiver has left Mims without a spot in team’s rotation at receiver.

As a result, Mims requested a trade yesterday.

Today, the Jets decided to grant his request and they have already reportedly heard from at least one interested team. According to The Atheltic’s Joe Person, the Carolina Panthers have called to inquire about Mims.

Carolina Panthers could reunite Denzel Mims with his college coach

Panthers have called about Jets WR Denzel Mims, per league sources. Mims had a pair of 1,000-yard receiving seasons for Matt Rhule at Baylor.
GM Scott Fitterer has said Panthers will be in on every deal. So Mims interest not surprising, esp. given his connection to Rhule. (1/2)

The Panthers are currently coached by Matt Rhule, who was Mims’ head coach at Baylor. Mims racked up 2901 yards and 28 touchdowns over the course of 3 years with Rhule and was a part of the 11-3 Baylor season that convinced the Panthers to hire their current head coach.

While a reunion with Rhule certainly couldn’t hurt for Mims, the Panthers likely aren’t his best option if he’s looking for a clearer path to a starting job. DJ Moore and Robbie Anderson are already locked into starting jobs with the team and just used a 2nd round pick on Terrace Marshall last year.

Despite all of that standing in his way, maybe his former college coach will be the person to give Denzel Mims his next shot in the NFL.