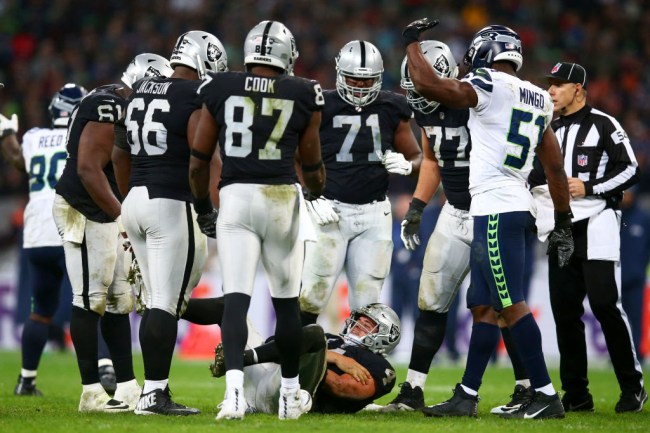 Of all the unlikely storylines that have unraveled this season–the Giants transforming into a JV team, Pat Mahomes punching his ticket to the Hall of Fame, the perpetual roughing the passer saga–quite possibly the most bizarre of them all is when Raiders QB Derek Carr seemingly broke down in tears during a London game against the Seahawks after being sacked and hurting his arm.

If you read Carr’s lips, it’s conceivable to believe that the grown man is calling for his “Momma.” Even if he isn’t, the mere possibility of it doesn’t bode well for him.

The 27-year-old whimpering on the field could have been perceived as a funny nuance if the Raiders didn’t suck so bad, but with the departure of Khalil Mack and now Amari Cooper and the team at 1-5, the incident has now been propped up as a microcosm of a nightmare season for Jon Gruden.

The Athletic’s Marcus Thompson recently reported that Derek Carr has a “fractured relationship” with his teammates, who have reportedly lost confidence in him, partly due to his emotional episode.

Raiders headquarters is not the best space for Carr. The belief in him has deteriorated, perhaps to irreparable levels. Team sources describe a fractured relationship between Carr and his teammates, mostly because confidence in him has waned. It certainly didn’t help when film showed what looked like him crying after being sacked and injuring his arm. They saw his face. They heard his whimper. They witnessed him explain on the sidelines. They assuredly watched it again in film session. It’s hard to see how Carr can lead this team again.

Barring a miraculous turnaround this season, it’s going to be interesting to see Carr’s fate. Evidently, Gruden has erred on the side of letting guys go too early rather than keeping them around too long, and if the three-time Pro Bowler doesn’t start playing up to the five-year, $125 million extension he signed before last season, he could be outtie 5,000.

Update: In the wake of these reports, Derek Carr has responded via Twitter:

I’m a Raider. It’s not a “popular” thing to be a Raider right now, but I am and I love it. I love the struggle of trying to fight back for our city when not a lot of people believe in us. People can try all they want to tear us apart, but it’s not happening to the real ones. 💀