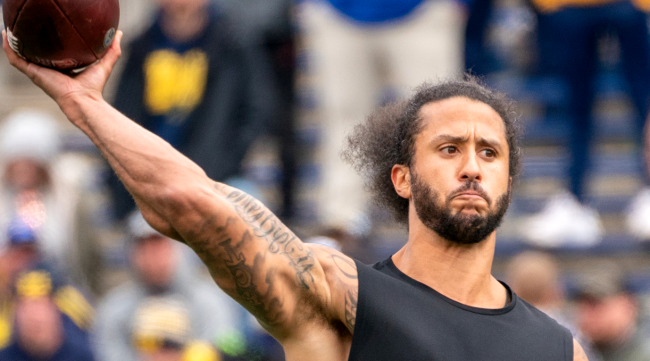 A few weeks back, the Las Vegas Raiders did something no other team has done in five years: they gave 34-year-old free agent quarterback Colin Kaepernick a tryout.

The tryout came about a month after Raiders owner Mark Davis told NBC Sports Bay Area that Kaepernick “deserves every chance in the world to become a quarterback in the National Football League.”

After the workout, the Raiders refused to discuss with the media how it went or what level of interest the team had in Kaepernick.

“We will only talk about the people that are on our team,” said new head coach Josh McDaniels.

Current Raiders quarterback Derek Carr recently signed a three-year contract extension worth $121.5 million back in April, so his job is pretty secure (despite some people still questioning it). He really has nothing to lose with the addition of Kaepernick to the roster, other than his presence possibly being a distraction, and says he would be all for it.

“Well, I know Colin,” Carr said this week. “I’ve known Colin since our days playing in the WAC conference, which is no longer a thing. My gray hairs may start to make a point for that. I remember our days back then, just watching him and what he did in college and getting to know him and talking to him on the phone and things like that. I’ve loved my time with him. I think he’s a great guy. He’s been great to be around him. I’ve enjoyed being around him, talking with him, competing against him. Josh (McDaniels) told him they were doing it and all that kind of stuff. I literally said the same thing I’m telling you: I was like, ‘I’ve enjoyed my time around him. I love him. Him and I would get along great.’ My brother (David) knew him a little bit from San Francisco. He’s like, ‘I love Colin. He’s awesome.’ I think Colin would just have to answer more questions than all of us would have to: ‘Why hasn’t it happened? Why this? Why that?’ But for me it would have been just fine. I enjoyed my time with him.”

Carr also added that he believes Kaepernick would be a good addition to the locker room, “For us, I think it’d be great. I don’t want to speak for everybody… I know him and I would get along great. I know we have in the past, and I think we would again. I think for the most part, I think he’d get along just fine with our guys.”

Should the Raiders actually bring Kaepernick in to play he would be competing with Nick Mullens, Jarrett Stidham and Chase Garbers for the team’s backup quarterback job.