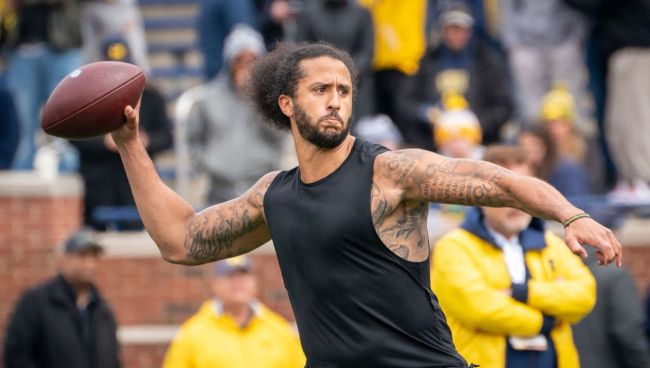 Despite having last suited up in the NFL way back in 2016, former San Francisco 49ers quarterback Colin Kaepernick remains open about his desire to return to the league.

Over the course of the last month or so, Kaepernick has reignited his public push to get back into the NFL, telling teams that he believes he can help them win.

“I can help make you a better team, I can help you win games,” Kaepernick said in early April. “I know right now the situation likely won’t allow me to come in, step into a starting role. I know I’ll be able to work my way to that though, and show that very quickly.

While Kaepernick’s return to the NFL doesn’t seem all that likely, there is at least one owner that apparently believes in his talents: Las Vegas Raiders owner and human haircut Mark Davis.

During a recent conversation on NBC Sports Bay Area’s Race in America: A Candid Conversation, Davis said that he “believes” in the 34-year-old signal-caller and that he would be willing to sign him if the team’s coach (Josh McDaniels) and general manager (Dave Ziegler) wanted him on the roster.

“I believe in Colin Kaepernick,” Davis said. “He deserves every chance in the world to become a quarterback in the National Football League. I still stand by it. If our coaches and General Manager want to bring him in or want him to be the quarterback on this team, I would welcome him with open arms.”

During his six-year NFL career, Kaepernick — who played in a Super Bowl with the Niners — started 58 regular-season games and completed 59.8% of his passes, throwing for 12,271 yards, 72 touchdowns, and 30 interceptions. Also dangerous on the ground, Kaepernick rushed for an additional 1,060 yards and 13 touchdowns.

RELATED: Colin Kaepernick Publicly Urges NFL Teams To Bring Him In For A Workout ‘My Talent, My Skillset Will Speak For Itself’