Derek Jeter Reveals Exactly When And Why His Relationship With Alex Rodriguez Fell Apart: Fans React 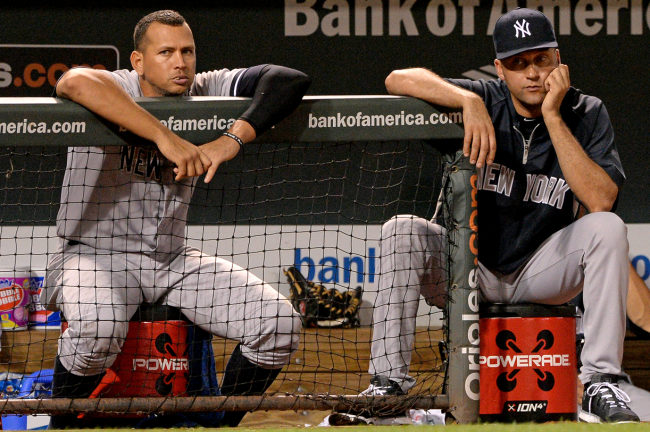 Any serious baseball fan knows that despite being teammates on the New York Yankees from 2004 to 2014, Derek Jeter and Alex Rodriguez were not exactly the best of friends.

It wasn’t always that way, however. The two baseball legends were at one time so close as kids that they slept over at each other’s homes.

The relationship actually began to fracture before A-Rod had even joined the Yankees, according to Jeter in the upcoming seven-part documentary The Captain.

Back in 2001, after Rodriguez had signed a record 10 year, $252 million contract to play shortstop for the Texas Rangers, he gave an interview with Esquire that changed everything for how Derek Jeter viewed his friend.

“Jeter’s been blessed with great talent around him,” Rodriguez said in the interview. “He’s never had to lead. He doesn’t have to, he can just go and play and have fun, and hit second. I mean, you know, hitting second is totally different than hitting third or fourth in a lineup because you go into New York trying to stop Bernie [Williams] and [Paul] O’Neill and everybody. You never say, ‘Don’t let Derek beat you.’ That’s never your concern.””

Rodriguez later apologized to Jeter for what he said, but the damage was already done.

“In my mind, he got his contract, so you’re trying to diminish what I’m doing, maybe to justify why you got paid,” Jeter says in The Captain. “When you talk about statistics, mine never compared to Alex’s. I’m not blind. I understand that. But we won! You can say whatever you want about me as a player. That’s fine.”

However, after apologizing, Rodriguez said in another interview “there’s not one thing he does better than me,” referring to Jeter.

“But then it goes back to the trust, the loyalty,” Jeter added. “This is how the guy feels. He’s not a true friend, is how I felt. Because I wouldn’t do it to a friend.”

In the upcoming documentary, Alex Rodriguez says it was his fault the relationship fell apart, saying, “to allow that opening, that gap, that space to come between Derek and I, that’s on me,” but he didn’t take back what he said back in 2001. Far from it.

“When that came out, I felt really bad about it,” said A-Rod. “I saw the way it was playing out. The way it was written, I absolutely said exactly what I said. It was a comment that I stand behind today. It was a complete tsunami. It was one of the greatest teams ever. To say that you don’t have to focus on just one player is totally fair.

“By the way, the same could be said about my team with the Mariners. We had Ken Griffey Jr., Edgar Martinez, Jay Buhner. If someone said that about me, I’d be like, ‘No s–t. Absolutely. You better not just worry about me.”

Jeter also says in The Captain, “One thing with me, I’m very loyal, but loyalty one way is stupidity.”

Baseball fans, depending on if they root for the Yankees or not, had varying opinions about what Jeter had to say.

Nope. Alex was the butthurt one and hated that Derek got more attention

ARod was media hype.
Jeter was the real deal.

I have to say Derek Jeter has some pair of you know what. He was covered so well by the media. Nothing A-Rod said was wrong. It bothers Jeter because it was 100% right https://t.co/VKCTirm0VR