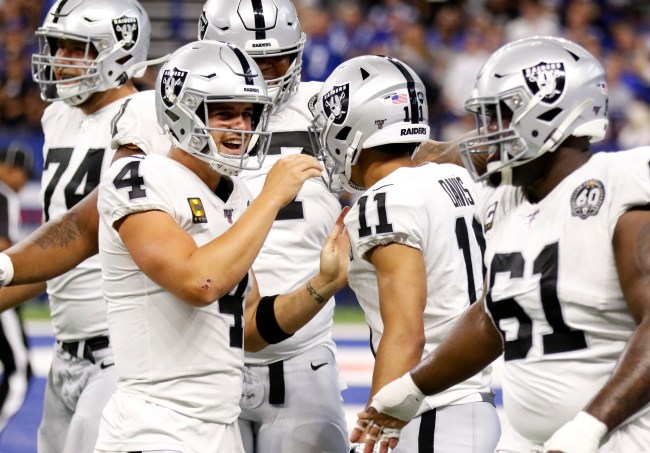 Heartbreaking is an interesting way to describe the season-long suspension of a man who seems to relish in delivering CTE to his opponents.

According to ESPN, Carr said Burfict is “one of the most misunderstood people in the NFL” and has become one of his favorite teammates he’s ever had.

“I don’t think he was trying to hurt that man; the man was going down. You see it all the time — there’s flags flying everywhere.

“We see other people choking people out, and they’re going to play this Sunday. We see other people hitting people in the helmet, and they’re going to play this Sunday. And Vontaze Burfict won’t play the rest of the year? I think that’s a little excessive, if you ask me. I don’t think it’s fair, if we really got to know the guy. If the people making the decision really knew the guy that we know, inside our building … he’s a great person, his heart is broken because he’s not playing football. The guy just wants to play football. We don’t get a lot of time to play this game in our lives.”

Carr was obviously addressing the dust-up between Ravens’ Marlon Humphrey and Odell Beckham Jr. (which amounted to nothing more than offsetting personal foul penalties.

Jones’ hit looks very bad from the angle above, but an alternative angle reveals that Jones seems to have tried to avoid helmet-to-helmet contact.

This angle shows why Jonathan Jones avoided an ejection. Trying to establish shoulder contact, neither lowered his helmet nor launched into Allen, and Allen is running forward with his helmet down. Perhaps an unnecessary hit, but Allen invited contact with the way he ran here. pic.twitter.com/eB2lKWZt7D

“I know the history situation and all that kind of stuff,” Carr said of Burfict’s previous violations, “but this one, especially with what went on during the week, if we’re going to be fair, we need to be fair with everybody.”

Burfict’s agent, Lamont Smith, told ESPN they are appealing the suspension and the hearing will “most likely be next Tuesday.”