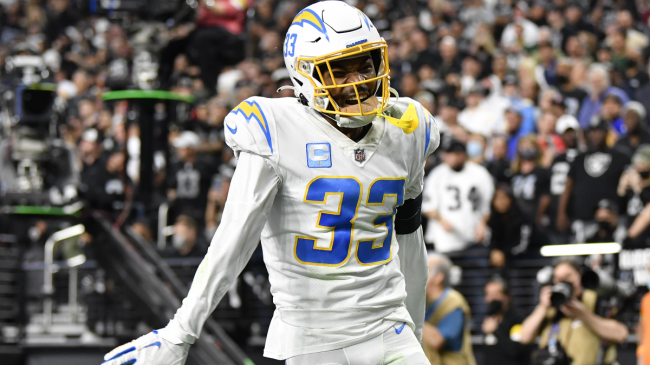 Derwin James looked more like a pro wrestler than a football player on Thursday night after body slamming Kansas City tight end Travis Kelce. And I mean, full on over the shoulder WWE slam.

The massive hit came with the tight end rumbling his way to the endzone, but James stopped the big man dead in his tracks. It would wind up being a major play as it forced Kansas City to kick a game-tying field goal rather than take the lead on a touchdown.

Obviously, there were a ton of reactions on social media.

Derwin James threw Travis Kelce around like he was a rag doll. I think everyone in the stadium was shocked to see how easily the safety was able to throw the tight end over his shoulder and escort him to the turf.

Fans on social media quickly reacted to seeing the bone crushing hit. Take a look at the immediate response on Twitter.

Take a look at a few more reactions from the NFL media.

James might have a professional wrestling career waiting for him once he retires from the NFL.