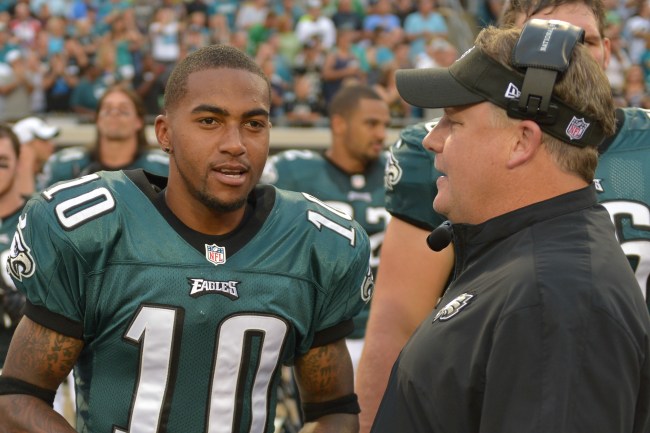 DeSean Jackson has hated Chip Kelly since Kelly cut him back in 2014 after rumors of his shady off the field “connections” and began to accumulate. Jackson later admitted that he still associates with “certain people” affiliated with gangs in Los Angeles.

Back when Kelly got canned by the Eagles in December of 2015, Jackson twisted the knife by saying that Kelly ruined the team and ‘bad karma comes back to you.’

It’s been over three year since Kelly and Jackson split unceremoniously, and Jackson has bounced from the Eagles to the Redskins to the Buccaneers. Kelly is currently the head football coach for the UCLA Bruins. Let bygones be bygones, right?

TMZ approached the three-time Pro Bowler at LAX airport and asked about his old Philadelphia Eagles coach. I don’t think the two send each other Christmas cards.

“We don’t even talk about that dude,” DeSean said about Kelly … “He’s a weirdo. He’s a big-time weirdo.”

Jackson appeared on Undisputed a couple weeks back and aside from Skip Bayless claiming Jackson is a bigger downfield threat than Randy Moss was, Jackson’s comments about Chip also constitute as news.

“I think everyone close to me knows how I feel about Chip Kelly. I don’t respect the way he did things,” Jackson said. “As a person, I don’t really like him.”

“But you know, he had to do what he had to do. That was his job. You know, moving forward in my life and in my career, I just have a bad taste in my mouth towards him.”

When you rid a team of players like Jackson, McCoy, and Maclin, you’re bound to ruffle some feathers.