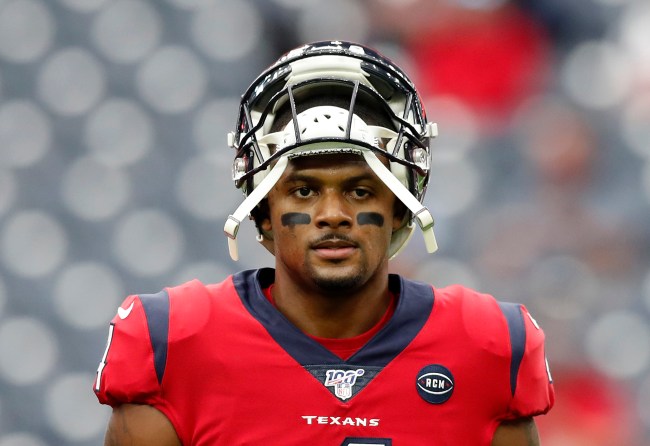 All 12 of those lawsuits have now been filed on Monday and Buzbee says he’s spoken with 10 additional women who want to bring their cases against Watson.

Five civil lawsuits filed Monday against Texans quarterback Deshaun Watson in Harris County, bringing total to 12 filed by Tony Buzbee. Watson has denied allegations and is represented by Rusty Hardin. Buzbee had said he would file at least 12 cases and possibly additional ones

Now that the lawsuits have been made public, we can parse through the allegations made against Watson and they’re pretty serious.

In one lawsuit, a masseuse claims Watson tried to grope her vagina, pushed her buttocks to his face, and touched her hands with his penis. At the end of the session, Watson only paid her $100 of the $300 they had agreed upon because she apparently “had not given him what he wanted.”

Watson asked for his quads to be massaged. She agreed and massaged the back of his quads for around ten minutes. Watson then asked if Plaintiff could massage his inner thighs, again she agreed.

Soon after, Watson asked Plaintiff to go “deeper.” Watson started moving his lower body in a circular motion and Plaintiff asked him to stop moving and lay still Watson turned over and started staring at Plaintiff and complementing her body. Plaintiff ignored his advances.

Shortly after, Watson asked for his chest to be massaged and Plaintiff did so. To Plaintiff’s shock, Watson groped her buttocks and vagina and then pushed her buttocks into his face. Plaintiff slapped Watson and asked him what he was doing, Watson stated “I thought you liked that.”

Plaintiff informed him that she did not like it and Watson apologized. Watson then told Plaintiff that he wanted her to remove the oil on his lower abdomen because he had to go to practice.

Plaintiff brought out a towel to wipe the oil off, but Watson requested that she use her hands instead to wipe it off. As Plaintiff was wiping the oil off, Watson began using his penis to touch Plaintiff’s hand. Plaintiff was mortified, so she used the towel to cover Watson’s private area and continued wiping off the oil with her hands.

Soon after, Plaintiff noticed a slimy substance on her hand, but she did not recognize it. Watson told Plaintiff that he had to leave and only paid Plaintiff $100 instead of $300. When Plaintiff asked her manager why she was not paid the full price, she was told that Watson said that Plaintiff had not given him what he wanted.

Watson asked Plaintiff if there was anyone else at the spa and Plaintiff said that it was basically empty. Plaintiff did not think anything was out of the ordinary at that time. When Watson arrived at the spa, Plaintiff realized it was the same man who had harassed her earlier that year.

Plaintiff told Watson that his behavior the last time was inappropriate. Plaintiff recalls that Watson apologized and told her something to the effect that he had never been rejected by a woman before.

Plaintiff told Watson that his behavior the last time was inappropriate. Plaintiff recalls that Watson apologized and told her something to the effect that he had never been rejected by a woman before.

Plaintiff informed Watson that she was a lesbian, so she was not interested in him and Watson agreed not to be inappropriate again. Plaintiff proceeded to give Watson the massage. Watson told Plaintiff that he only wanted his lower body massaged, so Plaintiff started off massaging the back of Watson’s quads.

Watson insisted that he wanted Plaintiff to “go higher,” closer to his butt cheeks. Plaintiff went higher, but Watson was still not satisfied, and insisted that Plaintiff come even higher Plaintiff was confused and did not understand. Plaintiff assumed that Watson wanted his back massaged, so she proceeded to massage his back.

Watson then grabbed Plaintiff’s hands and placed them on his buttocks and moved them around in a circular motion. Watson asked Plaintiff to use more oil and he then put Plaintiff’s hands inside his anus. Plaintiff was shocked and confused. Watson told Plaintiff “I can tell you are a lesbian because you are so good with your hands.”

Watson asked if Plaintiff was really a lesbian, Plaintiff ignored his advances and told him to stop acting like a pervert. At this point, Plaintiff was embarrassed and humiliated, but she did not want to lose her job. Plaintiff just wanted Watson to leave, but she was scared.

She continued massaging his chest, Watson then exposed himself and told Plaintiff to massage his penis area. Plaintiff declined and covered his penis. Watson asked why Plaintiff did not want to touch his penis. He then asked her to perform oral sex on him and to pretend that he was a woman, since she had never been with a man before.

Watson became even more aggressive and forced Plaintiff’s mouth onto his penis. Watson told her “there is a first time for everything.” Plaintiff was so scared and distraught, she was sweating and nervous. She was alone at the spa and feared scared for her life. Watson then proceeded to wrap his legs around Plaintiff’s neck and told her to kiss him and to spit on his penis.

After the lawsuits were filed, Watson’s lawyer Rusty Hardin called them “meritless allegations” and promised a response.

Deshaun Watson has denied allegations, is represented by Rusty Hardin. Hardin: 'I’m extremely proud to represent Deshaun Watson and wholly stand behind him against what we believe are meritless allegations. We will respond and ask you to keep an open mind until we do so.' https://t.co/rU3uhjBryX